"Cloudy with a Chance of Meatballs" noodles of energy and fun 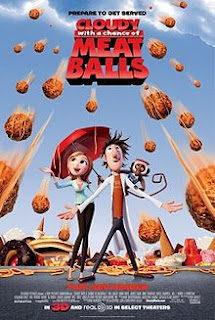 If you recall story time with your teacher and being read the beloved 1978 picture book by Judi and Ron Barrett comes "Cloudy with a Chance of Meatballs," and it's noodles of imaginative, energetic, delicious animated fun.

Flint Lockwood, played with manic energy by Bill Hader, is a defeated but hopeful inventor, since he was a kid, who's forced to work at Dad's sardine shop in his dull hometown of Swallow Falls (a tiny island under the 'A' of the Atlantic Ocean). He tries perfecting a machine that turns water into food. He finds a crush in a perky TV newscast intern named Sam (Anna Faris, in a lively, charming vocal performance) who shies away from showing her nerdy, supersmart side. Then burgers and all other sorts of food start raining like an epidemic that take the townspeople's mouths by storm, until it gets out of hand.

Fresh-meat filmmakers Phil Lord and Chris Miller and Sony Pictures Animation (credited as “a lot of people” in the title primer) bring personality, joy, and passion to "Cloudy with a Chance of Meatballs." More than just bright colors and an attention-getting fast pace, the humor is goofy, funny, and clever. It's lively, sometimes hyperactive, with peppy, whip-smart dialogue, likably endearing characters, gorgeous animation, nice lessons about being true to yourself, and lots and lots of raining food. That's no small feat, considering the source material is 30 pages long and the film goes the extra 30. Only does the movie get a bit frantic and repetitive when all that food starts falling, but it’s never short on energy, that’s for sure. The all-star voices are never distracting, including Andy Samberg, Bruce Campbell, and then some, however James Caan's bushy-browed Dad sounds exactly like James Gandolfini.

Here's the skinny on "Cloudy with a Chance of Meatballs": it's a treat and bring a big bowl of spaghetti and meatballs to tide over your moaning stomach.