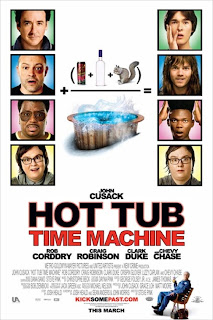 "Hot Tub Time Machine" is the kind of high-concept movie that resists much explanation of plot: the title says it all and will go in the “Hall of Fame of Good-Bad, Tell-It-Like-It-Is Idiot Titles” next door to "Killer Klowns from Outer Space" and "Snakes on a Plane." As extensive TV advertising has already made it clear, it's about a hot tub time machine, you see, and well, what else do you really need to know? After their alcoholic buddy Lou (Rob Corddry) tries to end it all in his garage, recently separated sad-sack Adam (John Cusack) and erstwhile musician Nick (token black dude Craig Robinson) take Lou and Adam's virgin-loser nephew (Clark Duke) on a trip to a ski lodge in Kodiak Valley, where the three buds-for-life memorably celebrated their crazy youth. Then there's a crazy, boozed-up dip in the hot tub, that with a spill of a Russian energy drink, transports them back to 1986—repeating old mistakes and changing the future.

Flagrantly stoopid, mirthfully lowbrow, but surprisingly clever and ridiculously funny, and so much for time-travel continuity or a lot of story (from the Josh Heald-Sean Anders-John Morris script), but who cares, it's "Hot Tub Time Machine." The bros-before-hos' chemistry is congenial: Corrdry is so hilarious and offensive that it seems director Steve Pink might've given him free reign; Cusack is great as a straight man with a nice romantic subplot; and Robinson has a funny joke involving an accusation of his future wife for cheating when she's only nine years old. It's nostalgic to the '80s teen-party flicks (which Cusack co-starred in back in his geeky days), with cues to "Miami Vice," leg warmers, and Michael Jackson's original skin color. Also, a few nods to "Back to the Future" point to Crispin Glover (The Marty McFly!) as the worst bellhop ever, with one arm, and we wait and wait to see how he lost it three decades earlier. Chevy Chase is funnier in TV's “Community” than the plot-device role he's given here, but he's still a blast from the past to see. A retro dumbass-fun dip back in time, the movie is well aware of how silly it all is and actually smarter than it looks.

As a remake of the 2003 French film "Nathalie," Armenian director Atom Egoyan's psychosexual drama "Chloe" is kinkier, bolder, and more psychologically interesting than a Hollywood potboiler. Julianne Moore plays Catherine Stewart, a successful Toronto gynecologist who has a pretty good suspicion that her professor husband, David (Liam Neeson), is cheating. So rather than marriage counseling, to test his faithfulness, she pays a beautiful, doe-eyed call girl named Chloe (Amanda Seyfried) to tempt him. Once Moore calls off the “business transaction,” Chloe turns her paid position into a fatal attraction with Moore.

Artsy filmmaker Egoyan takes a trashy story and strips it of sensationalism, but instead giving it nuance. From Erin Cressida Wilson's screenplay, the characters are strong and not without texture from the very strong performances. Admirably, "Chloe" is never played for camp by its performers. Moore is nakedly vulnerable and fiercely convincing as a scorned, lonely woman who longs to feel desirable by her husband again. Coming off of the innocuous "Mamma Mia!", Seyfried is entirely up for the challenge of such adult material and dives into her role as Chloe. The gorgeous, otherworldly 23-year-old is so innocently intoxicating and believable as a Hell-hath-no-fury femme fatale. Both actresses also share a soft-core, erotically titillating scene in bed together that requires going out of their comfort zones, but even a lot of their erotic dialogue seduces our ears. Neeson is given the least to do as David, whose point-of-view isn't really the focus here, but he's well-cast and perfectly fine as a man that would be desired by younger woman.

Production-wise, this is a stylish, rich-looking film. It's classed up with an elegantly soigne sheen and a patient, chilly mood. And how refreshing to see a movie set and actually shot in Toronto, rather than standing in for another city (Chicago, et al.). After a very surprising twist, the climax rushes into standard-practice “Hooker That Rocks the Cradle” territory. However, in the main, "Chloe" has more thoughtful subtext than late-night Skinemax and the characters are more than just lurid thriller pawns.