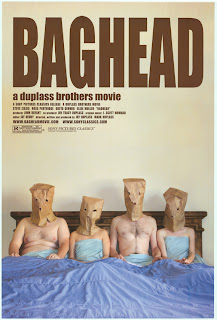 "Baghead," a spare, subtle micro-budget indie film written and directed by the Duplass Brothers, Jay and Mark, of 2005's "The Puffy Chair" and filmed on a handhand camera, is a small pleasure. Four struggling second-tier actors, Matt (Ross Patridge), Chad (Steve Zissis), Michelle (Greta Gerwig), and Catherine (Elise Muller), decide to jumpstart their careers, heading off to the Big Bear woods, east of Los Angeles, with the idea of writing a screenplay and filming it in two days. After somone with a bag over his or her head appears outside Michelle's bedroom window, they get the idea to use the baghead as their movie. Now, is it one of the three friends, or is there a fifth in the woods?

No matter, this isn't really slasher movie, but more of a skilled mixture of a relationship drama, a comedy, in-the-woods horror, and an offering of the “mumblecore” genre (unscripted, cinéma vérité-style low-budgets with a lot of talky talk). The first hour has a chatty, conversational quality that's fascinating but may be slow and boring to some, the performances are naturalistic, and the tone has an interesting variance.

It can be funny and sometimes scary (a shadowy figure in a dark room and the baghead's nightly confrontation both heighten the tension), but there's a story revelation near the end that's a bit predictable. "Baghead" might underwhelm casual moviegoers, but there's nothing else like it out there. 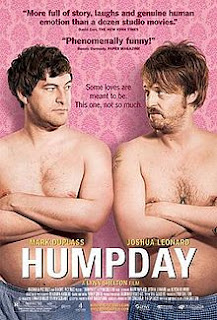 Oh, look what the “mumblecore” revolution drug in—it's called "Humpday." Here's a high-concept idea if you've ever seen one and it's not about Wednesday: two old straight friends get wasted at a party and come up with the idea of making a gay porn video for an amateur art festival. Ben (Mark Duplass, mainstay of the mumblecore movement with films like "The Puffy Chair" and "Baghead") is a married Seattle homeowner; Andrew ("The Blair Witch Project's" 'disappeared student' Joshua Leonard) is a shaggy vagabond artist. These two doughy hetero guys want to do it to show they are comfortable with their sexuality and as a form of art, but will they go through with it?

Alycia Delmore's Anna, Ben's patient-to-a-point wife, is the audience POV and we can relate to her. The cringe factor gets “erected” with some awkwardly real conversations between Ben and Anna leading up to telling her his plan with Andrew, followed by Anna and Andrew's getting-to-know-you chitchat over scotch where the truth slips out.

In "Humpday," writer-director Lynn Shelton (who has a small role as Andrew's lesbian sometime-girlfriend) takes a very unique route on the “bromance,” questioning the contradictory mind of the man and the normalcy of bi-curiosity in a homophobic culture. What went into making the film—besides a pre-planned central idea, it's all improvisation without any scripted dialogue—is a little more interesting than the film itself, as claustrophobic framing and close-ups tend to irritate, but not without a wry sense of humor and provocative insights.

The premise is believable within the boundaries of sexuality and so is the conclusion, even if it's more art than follow-through on its own premise. The acting is naturalistic, Duplass and Leonard feeling like real old pals, and they find humor and charm in the caj vibe of the dialogue and situation. Casual moviegoers might not be up to speed on the whole “mumblecore” school of filmmaking, just seeing it as sloppy camera work and forced naturalism, and in a way it does sometimes feel more like a self-conscious experimental home-video. Technical pretensions aside, "Humpday" has more to say and it's more endearing than the majority of comedies that Hollywood churns out. 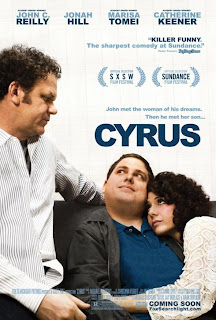 "Cyrus" is bound to catch mainstream audiences off guard—and surprise them in a good way; it's more of an indie drama with comic undertones. Writer-director brothers Jay and Mark Duplass (2008's "Baghead") take a warped, broad-comedy premise and do wonders with it.

John C. Reilly is impeccably cast as John, look at that, a divorced, self-described Shrek/freelance film editor who after 7 years of still being single suffers loneliness and lack of self-worth. Luckily, he meets Molly (Marisa Tomei), who's actually attracted to his honesty. They share a great night, but she never stays until morning. Why? To John's surprise, he finds out she's living with her 21-year-old son, Cyrus (Jonah Hill). He becomes clear almost right away that Molly and Cyrus have a creepily close relationship: son uses the bathroom even while mother's in the shower. Bates family, is that you? While John tries his best to create a family with Molly, Cyrus will not cooperate as he's too protective of Mommy.

"Cyrus," a witty, spiky, satisfying relationship comedy of Oedipal proportions about letting go, easily could've turned into a farcical showdown (much like Reilly's "Step Brothers"), but goes in a different direction. Not that there aren't a few pranks between Cyrus and John, but it has more of the telling details rarely seen in contemporary comedies. Jonah Hill goes to new places, using his facial expressions and body language; he's creepy and then tender in the unpredictability and insecurity he gives to Cyrus. Tomei is wonderful as Molly, as is Catherine Keener in a supporting role as John's still-supportive if still-long-suffering ex-wife.

The filmmakers still show signs of the “mumblecore” movement they spearheaded from "The Puffy Chair" and "Baghead" in their first independent picture with mainstream actors, as it's hard to tell what has been improvised and scripted in the dialogue. The Duplass' handhand, close-up camera work initially zooms in and out and sometimes goes out of focus for no reason, but then the shaggy, rambly style works, getting us into the characters' faces, where we too can feel their emotions and discomfort.

With spot-on performances that show personal awareness and character arcs, "Cyrus" hits all the right notes trading in juvenilia for a low-key, off-kilter sense of humor and uncomfortable truth.