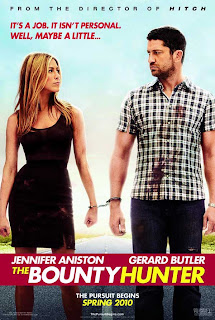 You don't have to stick out "The Bounty Hunter," which stars Jennifer Aniston's glutes and Gerard Butler's biceps, to know Butler and Aniston are tanned, attractive, camera-friendly movie stars. That's what Life & Style and People magazines are for, right? So there's no reason for this movie to exist. Aniston is Nic, a news reporter out on bail for assaulting a police officer, misses her court date over investigating a suicide story that may actually have been a murder. Now, a bench warrant is issued for her arrest. Who better to arrest her and bring her into custody than, drum roll please, Nicole's ex-husband Milo (Gerard Butler), a ex-cop-turned-bounty hunter. The exes verbally slam one another and go on the run from thugs with guns who are after Nic and debt-collecting loan sharks and bookies for Milo. Will they reconcile their differences along the way?

If you can't even take a moment to reflect on "Bird on a Wire" with Goldie Hawn and Mel Gibson, two decades ago, then "The Bounty Hunter" will probably float right out of your consciousness as well. We believe these two stars hate one another, but we hate them too and this often obnoxious, forgettable romantic/slapstick/road movie/thriller doesn't know what to do with both red-hot veterans of the rom-com genre. Aniston gets by purely on her plucky good will and probably did her own stunts (i.e. walking in heels), but she needed more likable lead company than the rugged Butler's uncouth Milo, mostly a grating and smarmy hooligan, and a less mess of an overlong, needlessly complicated script.

Director Andy Tennant attempts to liven things up with Billboard's Top 40 music hits, but rarely anything works: the banter grows tiresome, the cut-and-paste bad guys are morons, and there's barely any sexual heat between the leads. The only laughs are courtesy of Christine Baranski, who seems to be doing a Joan Rivers impersonation as Nic's entertainment-club mom, and Jeff Garlin and Siobhan Fallon Hogan as a bail bondsman and his gum-smacking wife. Otherwise, Cathy Moriarty, Carol Kane, and Jason Sudeikis are wasted. For everything that fails, "The Bounty Hunter" does get two things right: a golf-course chase always ends with a cart in the water and squabbling exes always, always fall back madly in love. Well, what else is there to say about the Aniston-Butler vehicle besides you don't get what you pay for. 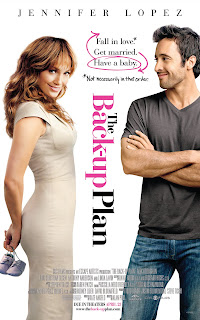 With "Gigli" now 7 years behind the diva star, there's nothing better than a cutesy preggers-romantic-comedy to Botox the saggy career of Jenny from the Block. But "The Back-up Plan" feels like it was artificially inseminated itself. First meeting her in stirrups, Jennifer Lopez plays Zoe, a single woman who owns a pet store and has dated over 100 men but can't seem to find “the one.” Oy, another unbelievable dilemma for a gorgeous movie star, but opting for artificial insemination sounds like a great back-up plan. On the same day, she meets hot farmer/cheesemaker Stan (Alex O'Loughlin) who tries stealing her taxicab, and turns out to be a great guy with great pectorals but with follow-through problems. But once he finds out Zoe's preggers, will he stay or will he go?

Largely a formula vehicle for Lopez, this one is friendly but so blandly pedestrian and pandering. Lopez is charming and appealing as ever, O'Loughlin (masking his Aussie accent) is swoon-worthy and charismatic, and these two attractive stars have a nice chemistry. With the movie produced by CBS Productions, sitcom writer Kate Angelo's babyish and unfunny script plays like an extended sitcom, obsessed with vagina jokes, poop jokes, and pratfalls. TV director Alan Poul gives the star a big belly but not enough belly laughs to go with it, unless you count a wink-wink about Zoe losing her bodacious booty (not unlike Lopez's famous real-life bootae).

No clichés go missing either, Zoe giving herself pep talks in a mirror, falling asleep before sex, cute reaction shots from her cute two-legged Boston terrier that gets ahold of her pregnancy test (cute!), and one of those fake break-ups 20 minutes before the end. There are also some very strained jokes, such as a dinner date gone awry ending with a water hose fight and a broadly overplayed water-birth of screaming and heaving in a New-Agey single-mother support group's apartment.

“SNL” talent Michaela Watkins affords the only cynical one-liners as Zoe's anti-baby friend, a mother of four, but a slimmed-down Anthony Anderson shows up inexplicably to give Stan fatherhood advice. You don't need an ultra-sound to know where any of this is going so your “back-up plan" for more charm on J. Lo's résumé would be "Maid in Manhattan." Or even "Anaconda." This is just another arrow through the heart of the rom-com genre.