"Invention" starts out spiky and witty, then loses its way 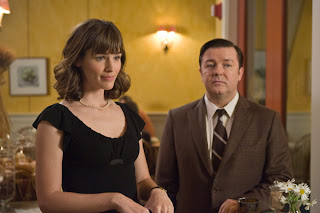 The truth is The Invention of Lying has an engaging high-concept premise that calls for a more subversive and inspired comedy than what's invented here.

In a parallel world where everything is the same, everyone very bluntly says what's on their mind (Tourette's?), no matter how rude or hurtful. Ricky Gervais, who makes his behind-the-camera debut (co-directing and co-writing with newcomer Matthew Robinson), stars as Mark, a sadsack screenwriter who gets no respect from his cohorts at Lecture Films and is about to be fired for his failed 14th century/Black Plague script. And then he discovers he can lie!

No lie, the joke runs out of steam after a stinging, occasionally hilarious first half hour with the cast's brutally honest quips. From a grateful jolt by some spiky, witty dialogue, likable performances, and nice pop-up cameos by Tina Fey, Philip Seymour Hoffman, and Edward Norton, the film has its moments, but loses its way and softens its edges with most of the sappy, predictable beats of a rom-com.

For most of the film, Gervais shows his nasty wit, but should've followed through. Maybe next time, Ricky.