"Life" is well-acted and potent enough 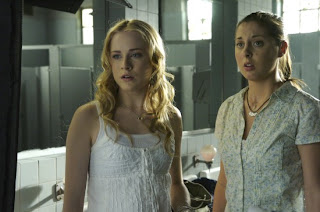 In a role not much different from Thirteen, Evan Rachel Wood plays troubled 17-year-old Diana who faces a life and death situation from one rampaging student's brutal shooting one sunny school day. Fifteen years after the event (also the anniversary), an Uma Thurman-looking Diana is now a wife and mother who can't escape her mournful past.

The Life Before Her Eyes weaves back and forward between both timelines of Diana's life, with a revelation that could have been an M. Night Shyamalan-esque “trick ending” but relies more on character psychology than plot mechanics.

Opposite of Gus Van Sant's Elephant, a haunting 2003 dramatization of a Columbine-like high school shooting, this film is more interested in the ramifications of survivor guilt than the massacre itself. Some of the foreshadowing is a bit too on the nose and the reflections often elliptical and repetitive, but it's hard to not be drawn in by the past of Diana.

And the relationship between Diana and her friend Maureen (Eva Amurri), though having opposite personalities, rings true and works to the film's advantage.

Adapted for the screen by first-timer Emil Stern from Laura Kasischke's novel, Vadim Perelman (House of Sand and Fog) skillfully shoots his film with lushly symbolic, almost dreamy imagery of flowers and raindrops.

Perelman's independent picture is compelling and strongly acted, rising above most melodrama and with a powerful denouement that'll leave you shaken concurrently posing questions rather than answering them.