"Lymelife" well-acted but we've seen it before 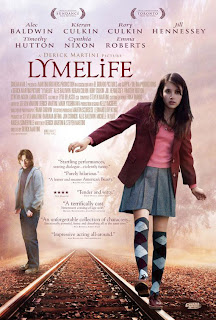 "Lymelife" isn't the first time suburban American has taken a hit into dysfunction. In this little family-unit coming-of-age indie, set in 1979 of the Long Island 'burbs, Timothy Hutton underplays his distant headcase of a dad who sits crouched in the basement with unchecked symptoms of Lyme disease (from those damn ticks), watching his marriage with a shrewish realtor (Cynthia Nixon) crumble. Rory Culkin is very good as the bullied teen next door, who suffers from the unrequited love of Hutton and Nixon's snobby daughter (Emma Roberts), and faces the at-home tension between his squabbling parents (Alec Baldwin, Jill Hennessy) on the brink of divorce; Culkin's real-life brother Kieran shows up as his big brother back home from fighting in the Falkland Islands.

Director Derick Martini and his co-writer brother Steven bring some dark humor to a seemingly bleak affair and it's vividly played. The manipulatively edited final moments build to something less ironic than the filmmakers think, even after changing their original ending. Hennessy and the Culkins gain the most sympathy, but the rest are pitied or annoying, including Baldwin's shameless slimeball, that it's hard to connect with them. The '70s music choices are enjoyable, and the Martinis are generous in making their characters human beings, but there's no real emotional focus. "Lymelife" is yet another slice of messed-up Americana.