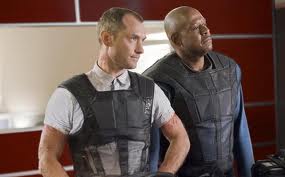 In one of those not-too-distant futures with rain slicked streets and little girls jump-roping to “Stomach, bladder, intestines,” people who don't pay for their bodily transplants have their organs repossessed.

In Repo Men, Jude Law plays a repo man for a company known as The Union and then goes on the run (from partner Forest Whitaker, boss Liev Schreiber, and other goons) when he can't show the bucks for his literal change of heart.

The idea is depraved and fairly intriguing, but this health-care sci-fi horror tale gradually loses its effectiveness in execution.

Repo Men benefits from Miguel Sapochnik's stylish direction and has a morbid sense of humor about itself (i.e. a 9-year-old girl turns out to be a surgeon), including some gruesome, increasingly numbing gore. Even though the script feels like a transplant of other movies like Blade Runner and Repo! The Genetic Opera with some scenes ripped from Videodrome and Pulp Fiction, it's really based on a book called “The Repossession Mamba.”

Bulked-up Law performs with such good cheer even when he's slicing up clients and there are some entertaining, unapologetically over-the-top action, but Repo Men doesn't really serve a point as its twist ending is a stab in the gut.

Not to be confused with the 1984 Repo Man with Emilio Estevez.