Shyamalan's downward spiral goes on with "The Happening" 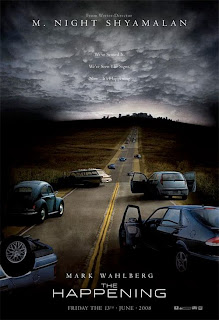 It's happened, M. Night Shyamalan has cooked his second real turkey with "The Happening."

Some kind of neurotoxin is released into the air of New York's Central Park, where people freeze, grow catatonic and then become suicidal crazies. After the airborne event spreads throughout Manhattan, initially thought to be some sort of terrorist attack, it expands to Philly. High school science teacher Elliot Moore (Mark Wahlberg), his emotionally distant wife Alma (Zooey Deschanel), and friends find their way to rural Pennsylvania, fleeing from the wind. Could it be Mother Nature getting its revenge? Oh the terror!

Starting off with a tense and even frightening bang, there are some creepy, graphic shocks in store. The ads weren't kidding with this being writer-producer-director M. Night Shyamalan's first R-rated release: a woman on a park bench takes out a hair pin to penetrate her neck, construction men jump off the top of a building one after another, a zookeeper feeds his arms to a lion (!), and a suburban man lays in front of a lawnmower to finish the job. But it's a real pity this "Twilight Zone" tale "develops" into such absurd nothingness. Shyamalan's third miss in a row after "The Village" and "Lady in the Water" may not finish with his signature twist conclusion and doesn't offer cut-and-dry resolution, but it ends up being a static anticlimax instead.

Idiotic, stilted dialogue and weak acting will induce unintentional laughter when everything's supposed to be taken serious as a heart attack. John Leguizamo gives the most empathetic performance as a math-teacher friend. Shyamalan insists the mannered performances are part of the throwback to disaster movies, but an uncharacteristically whiny Wahlberg is so flat and earnest that even his apology to a houseplant falls flat, even if it was intended to be funny. Deschannel's character (whose blue saucer eyes really stick out here), although said to be "distant," looks so detached and robotic; her strained marriage with Wahlberg is unconvincing to boot, as she's wrapped up in a "secret" from her hubby that she accepted dessert from an obsessed co-worker (what??!!). Betty Buckley is most memorable as a crazed country hermit.

Truth is, not a heck of a lot does happen in "The Happening."