The film's biggest star, Brad Pitt, plays Lt. Aldo Raine with gusto in a free-wheeling, cartoonish performance, but it's Christoph Waltz as slimy, ruthless Nazi colonel Hans Landa known as “the Jew Hunter” who's fantastically loony and, hah, waltzes off with the most memorable villain of the year. He's menacing in all languages, sliding from German to English and even French. Diane Kruger is stronger than she's ever been as a double agent actress at a rendezvous in a Nadine tavern. And Melanie Laurent is very expressive in her meaty role as Shosanna; it's riveting watching her revenge plot against Nazis for her family.

Film auteur Quentin Tarantino apparently has never believed in brevity but he's like a kid in a candy store when it comes to self-indulgently talky stretches of dialogue, being the genuine film geek that he is and having his actors juicily shoot the breeze (although much of it subtitled). And it wouldn't be Tarantino if there wasn't violence and enough blood splatter for a Jackson Pollock painting in the movie's long but never dull 2 ½ hours.

The opening scene has a methodical buildup, all starting with a glass of milk; there on, each scene follows the same dialogue buildup and tension rises, before erupting into bursts of violence. It won't take long to realize the violence is hard to take, not unlike the torture in Hostel. Maybe that's because Eli Roth, the director of those films, is a comrad of Tarantino. Roth plays comrad to Raine, The Bear Jew, who bashes Nazis' brains in with a wooden club. Here, it's anti-Nazi violence, with scalping, beating Nazis with wooden bats, and carving swastikas into their foreheads. Nor does he care about historical accuracy, as he rewrites history before our very eyes in all its gory glory and gonzo madness, culminating to an insanely outrageous, exhilarating explosion in Shosanna's movie palace premiering a Nazi propaganda picture that gives Hitler a chuckle for his money.

There should've been more of the “inglourious basterds,” since it is the title and all, not to be confused with the 1978 Italian film "Inglorious Bastards" (and its correct spelling). But Tarantino's characters are vivid and his movie has one-upmanship on "Valkyrie" with the actors actually speaking German with subtitles. 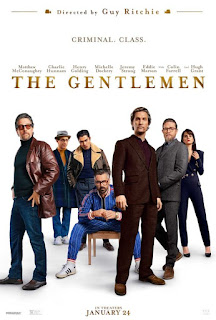 Gents Will Be Gents: Slick, cheeky "Gentlemen" showcases what Guy Ritchie does best with stacked cast