"Twilight" series not as bad as word-of-mouth 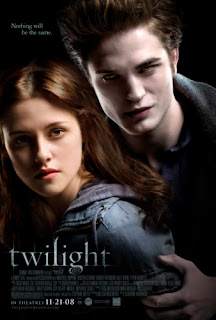 "Near Dark" meets a Harlequin romance better than it has any right to be in "Twilight," the eagerly anticipated adaptation of the ever-so-popular young adult series. Sullen adolescent Bella Swan (Kristen Stewart) moves from Arizona to the misty town of Forks, Washington and meets the smoldering, fangless Edward Cullen (Robert Pattinson), all the way from Alaska, whom she thinks is the cat's—er, bat's—pajamas. Yes, Edward is, say it aloud, a vampire! When it comes to Bella, Eddie is a lover, not a biter. It turns out Edward and his family aren't into human snacking; they're “vegetarians” rather, but there is another pack of bloodsuckers getting a nose-full of Bella's savory scent that may want a taste.

Surprisingly low-key and entertaining, whether or not you're a drooling teenage girl or if you've read Stephenie Meyer's books. On its side are a leavening, sly sense of humor against the otherwise gravely serious tone and rapturously crisp photography in Oregon and Washington State that you can almost smell the wet trees. Directed by Catherine Hardwicke, it's decidedly more indie film than big Hollywood blockbuster, and bravo to that; she visualizes the vampire culture better than imagined (the way Edward sparkles like a diamond in the sunlight and when his family plays a game of baseball during a thunderstorm). Stewart gives an earnest, mature performance as Bella, Pattinson is perfectly cast and dreamy as Edward for his magnetic physical features—pasty face, pouty red lips, and wavy big "Lost Boys" hair—while his delivery is occasionally stilted, but together both actors sell their soft-focus romance with chaste but subtly heated chemistry. Hardwicke captures their virginal yearning. Supporting characters get the short end of Melissa Rosenberg's script, as fine actors make the most of underdevelopment. Peter Facinelli feels questionably cast as Carlisle, Edward's father figure, but Anna Kendrick stands out as Bella's spitfire friend Jessica. Watch for Meyer, the author herself, making a quick cameo as a counter customer in Forks' diner.

Detracting from what the film does get right are the cheesy special effects of Edward monkey-climbing up trees and some groan-inducing dialogue (“You're like my own personal brand of heroin” springs to mind), with even one of the more famous lines from the book (“And so the lion fell in love with the lamb...what a stupid lamb...what a sick, masochistic lion.”) probably reading better on the page of Meyer's flowery prose than hearing it on screen. The ending comes somewhat abrupt, although it is meant to be a cliff-hanger, since not unlike the "Harry Potter" franchise this too will continue as a film event with its book's follow-ups. In its own angsty teen soap-opera sort of way, "Twilight" mostly lives up to the appeal. 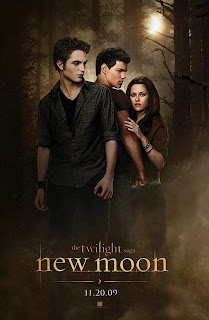 Swooning, starry-eyed “Twi-hard” fans who've read all four books at least twice will only care about taking sides between Team Edward or Team Jacob (whose mascot, respectively, smolders before being off-screen for a sizable hour and gives Cher her wig back to perpetually be seen running around with a crew-cut, shirtless). But let's save a review of the weird, worldwide phenomenon for another day because this review is solely about the movie, "New Moon," or our preferred title, “Twilight 2: Electric Boogaloo.”

Having just turned 18, Bella (Kristen Stewart) spends her birthday with her sparkling, 109-year-old vamp boyfriend, Edward (trembling Robert Pattinson), and the Cullen clan, ending in a close-call with Bella's blood-dripping finger and one of their fellow vamps. So Edward decides to keep his distance, pack his hair gel and suntan lotion, and leave town. This leaves Bella in months of despondence, bad dreams, and all-around sullen angstiness, until she turns to long-haired tribal friend, Jacob (Taylor Lautner, now ripped and muscly for the part), with a hairy secret of his own. And no, he's definitely gone through puberty, so keep guessing. Bella baby also becomes an “adrenaline junkie,” trying out motorcycles and jumping off cliffs. Meanwhile, vampy, ginger-headed baddie Victoria (Rachelle LeFevre) is also still out for blood from Bella and Edward for killing her lover, and Edward heads to Italy to have himself put to death with the royal Volturi family of the vampire empire.

Taking over for Catherine Hardwicke, Chris Weitz directs with a similarly melancholy, greyish mood and style. Among some beautiful imagery armed with a mopey but resonant music soundtrack, there's a nice, dizzying visual touch where Weitz moves the camera 360-degrees around Bella three times to show the seasons changing outside her window as autumn turns to winter. But the CGI werewolves—no, they look more like wolves on 'roids—look just fake. This time, Melissa Rosenberg's screenplay attributes to "New Moon" being a fleck better than "Twilight": a lot more glacially paced and not as focused but comparably more affective. The angsty Degrassi-ish melodrama still gets laid on with a trowel. Here, at least, the eye-rollingly overheated purple prose from Stephenie Meyer's series is cut down to normal English, and instead conversation from Bella to Jacob reads like this: “You're buff.”

Stewart sulks, bites her bottom lip, and contemplates with her face, but we don't get “I wasn't interesting. And he was. Interesting...and brilliant...and mysterious...and perfect...and beautiful.” The lead actors slip into their roles with ease and give intense, self-serious performances. Michael Sheen and Dakota Fanning, as Aro of the Volturi coven and Jane, his deadly, pain-inflicting little pixie, give delicious if very small parts. "New Moon" ends on another cliff-hanger, but readers will already know what they're in for in "Eclipse." 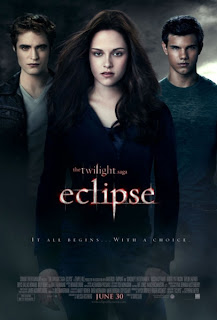 Bella (Kristen Stewart), about to graduate high school, lessens her moody lip-biting and contemplates marrying Edward (Robert Pattinson), her chivalrous, blood-quenching knight, while Daddy Police Chief (Billy Burke) still doesn't approve of the odd boy. And poor, lovesick Jacob (Taylor Lautner) has deeper-than-friendship feelings toward Bella, who supplies her with more heat than Eddie would ever provide. Meanwhile in Seattle, a newly transformed pack of vampires called “newborns” are on a rampage, headed by Victoria (Bryce Dallas Howard taking over), as the Volturi overlooks the damage. Bella also has a lot of love-searching to sleep on: will it be the cool, emo vampire or the hot, shirtless werewolf? Twi-hards (or Stephenie Meyer's 'tween readers) can already answer these questions but will be out for blood to see how the smoldering romances translate on screen...and if legal hunks Pattinson and Lautner take their shirts off.

At this point there'll be no crossover appeal to non-fans, but "Eclipse" is about as good as the previous "Twilight Saga" films, taking itself most seriously with less-cheesy effects and more soap-opera sudsiness. All three of the leads are maturing as actors, Pattinson and Lautner (turning into a brick shithouse-built Matt Damon) also minifying their posing and fully invested in their own characters. Stewart really comes into her own here, with the camera capturing exactly what she's thinking, and her Bella finally thinking for herself rather than being defined by her male-monster gazing. The Cullen clan get more time and some deserved flashback backstory, especially Nikki Reed's Rosalie (who finally lets us in on why she's so cold towards Bella). Their new boss, director David Slade, doesn't really have the scope to be an action director for the vampire-running scenes, most of them too blurry to make out. Too much woozy, shaky-cam work with confined, extreme close-ups gets us into the pores of every actor on screen. However, the big battle between the allied Cullens and Quileute wolf tribe vs. “newborns” is thrilling and surprisingly more graphic than its PG-13 entails.

There's a dry comic self-awareness to go with the melodrama, like Jacob and Edward's feuding: “I'm hotter than you,” then “Does he ever wear a shirt?” and Burke's father has a funny exchange about safe-sex with Bella. More talk and less action isn't necessarily a bad thing, as every other scene seems to be Edward's marriage-proposal to Bella, but all of them are emotionally tender and sexy, albeit promoting abstinence and denouncing premarital sex (all teenage girls, listen to Edward). Can't wait to see how the director for the very last movie, "Breaking Dawn," will depict Edward giving Bella a C-section with his fangs...oops, was that a spoiler?