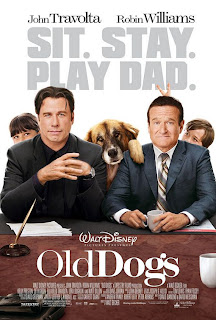 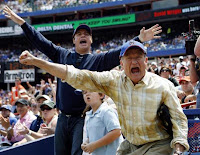 Who let this dog out? Better yet, why wouldn't Robin Williams and John Travolta have better judgment to euthanize this dog rather than sign onto it? Labored, sappy, and obnoxiously stupid, "Old Dogs" is the kind of childish Disney slapstick vehicle Burt Lancaster and Kirk Douglas did in "Tough Guys" or Bob Crane in "Superdad." Williams and Travolta mug like they're on sugar highs playing old pals and business partners, a cartoonish sadsack and a cartoonish bachelor, who put aside their business routine on the arrival of Williams' 7-year-old paternal twins that he never knew he had, when his former spring break fling (Kelly Preston) shows up and has to go to jail (don't ask).

As exhausted and dumb as the premise, director Walt Becker (he of the other lame Travolta-starrer "Wild Hogs") and the editors botch the would-be sight gags with frantic overplay and forced execution. Seth Green gets hit in the crotch, not once, but twice, and Williams falls into a pond not once, but four times, as a kind of instant replay. They all fall flat. Painfully obvious comedy is spelled out loudly in ALL CAPS; for example, Rita Wilson's cross-eyed hand model character gets her hands slammed in a car trunk, screams, and the soundtrack cues “Big Girls Don't Cry.” (They should've cast plus-sized Kirstie Alley to telegraph the joke even more.) Or, another example: when these seasoned actors have their medications switched and trip out.

Matt Dillon, Justin Long, Ann Margaret, Amy Sedaris, and Bernie Mac guest star, but none of their roles go anywhere so the director must've owed them favors or they were desperate for a gig. Mac, this being his last movie, died in August 2008, but "Old Dogs" really must be an old dog that sat on the shelf too long. To quote one of the actors, “Scat happens,” and the same goes for what happens when funny people do something contradictory like "Old Dogs."