Likable actors show their claws in tired "You Again" 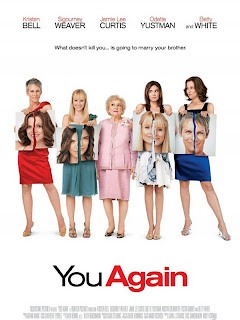 The “mean girl” syndrome carries over to two generations of actresses in "You Again," a tired, contrived, but harmless sitcom-style comedy that we've met before in the shrill "Bride Wars." The always-adorable Kristen Bell plays Marni Olivia Olsen (how her parents didn't catch onto her initials being MOO is beyond anyone, including the screenwriters), an L.A. publicist with painful, zitty, four-eyed memories of her high-school torture. Going home for the wedding of her older brother Will (Jimmy Wolk), Marni discovers—get this—he is marrying Joanna (Odette Yustman), the cattiest cheerleader responsible for ruining her teen years. To top it off, Joanna pretends she doesn't remember going to school with Marni and her last living aunt, spa-hotelier Ramona (Sigourney Weaver), is Marni's mom Gail's (Jamie Lee Curtis) high school “frenemy”! Ripley waging a war with Laurie Strode! Boo yah! And this being one of those movies, no one is over it yet. Get over it! 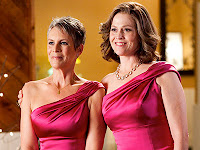 Despite the game efforts of such a likable cast, "You Again" works more as a private party for the entire crew. To the audience, it's like a party without an open bar. Curtis and Weaver are over-50 pros and get some fun mileage out of this juvenile material (and spry 88-year-old Betty White adds life as wisecracking Gramma Bunny), even if they deserve a smarter, less ham-fisted script and better direction than what first-time feature writer Moe Jelline and Andy Fickman have done. The most amusing jokes were in the trailer, leaving the actual movie to telegraph its hopelessly obvious and lame gags: Whenever there's a shot of a bowl of pea soup, be prepared for it to get dumped on someone's head. Or when an earring is held above a sink, you bet your ass it's going to fall down the drain and water will drench the actor in their retrieval attempt. Oh, and if two well-dressed characters argue near a pool...good job, you're catching on!

After all the unfunny cat fights, there are three piano-key Second Chance/Apology Scenes in a row that want to be touching but settle for pat fluff. Kyle Bornheimer gets oddball laughs as Joanna's morose, obsessive ex-fiancee, as does Kristin Chenoweth as an over-the-top (what else?) wedding planner. And how appropriate for a big-screen sitcom that old sitcom stars give cameos, from Reginald VelJohnston (Carl Winslow from Family Matters) to Patrick Duffy (Frank Lambert from Step by Step). The staged cast fight promo for "You Again" has more bite and humor than the movie itself. In fact, it should've just been White's movie as her and Cloris Leachman also get their quick chance to duke it out.