Overlong, uneven "Pineapple Express" only has a few laughs 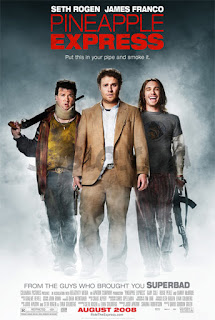 The likable Seth Rogen does a riff on his slacker/schlub from "Knocked Up" in "Pineapple Express" as Dale Denton, a 25-year-old process server who frequently lights up a doobie in between assignments and is dating a high school girl (Amber Heard). One day, after accepting a sample of a very rare, potent weed called "Pineapple Express" from his spacey pot dealer Saul (James Franco, who gets to showcase notable comedy chops), Dale later drops the roach in a panic when he witnesses a drug mogul (Gary Cole) and a dirty cop (Rosie Perez) murder an assassin sent by rival Chinese dealers; this leads to Cole's henchmen going after this unconventional Cheech and Chong pair.

This raucous but uneven and self-indulgent hybrid of violent action and stoner comedy is a big disappointment from the Judd Apatow Comedy Express, as it should have been funnier and more fun. But maybe that's because not all moviegoers will choose to view it under the influence of maryjane or some varying altered state, since Dale and Saul rarely have a clear-headed moment themselves. In a change of pace from indie arthouse to mainstream studio pictures, director David Gordon Green's characteristically shows strength in the character-driven moments rather than the action. The script (written by "Superbad" writers Evan Goldberg and co-star Rogen) has some sharply amusing dialogue that's more or less much ado about nothing, but some scenes are done in by dull, talky stretches. In one especially funny sequence, however, our stoned heroes end up in a wild car chase, with Saul driving a cop car (and Dale in the backseat), then kicking his foot through the windshield, only for it to get stuck.

Too bad the film suffers from unnecessary overlength—it's a stoner comedy, not "Lawrence of Arabia"—and subplots that don't lead anywhere (i.e. Rogen's young girlfriend who's told to stay at a hotel with her family, for she may be in danger, is never put into the action or heard from again). If anything, Rogen and Franco reprise the natural, easygoing chemistry they shared on TV's “Freaks and Geeks”; there are some stray amusing tidbits, including a black-and-white prologue with Bill Hader on how the joint came to be and the stuff with Saul's middleman Red, played by lunatic Danny McBride.

Pass this joint, but don't smoke it because "Pineapple Express" is strictly for tokers: it's like going to a party sober where everyone else is trashed and laughing their asses off to Kingdom Come and you're not.