"Demons" schlocky but not much fun 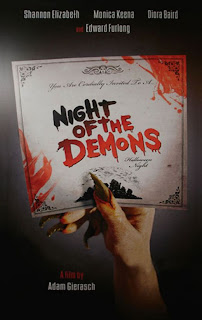 "Night of the Demons," a tacky remake of the memorably fun 1988 cult cheapie, is passable schlock, with a fast pace, blaring punk-rock soundtrack, and the requisite gore and nudity: what more could a 17-year-old boy want? The primer gets things off to a gory-fun start in the style of a 1920s silent film. Then a group of Typical, Stupid Hotties go to a Halloween party in the old, creepy Broussard Mansion where some bad black-magic hoodoo took place, or as legend has it. Their kinky host (Shannon Elizabeth) is bit by one of seven skeletons in the basement, then seduces everyone until she turns them into horned, horny demons. Not all of them will survive the night from Hell.

Some gleefully nasty bits include a demon ripping a girl's face clean off with her teeth and another where a demonic bimbo inserts a lipstick tube into her nipple and it comes out of another orifice. Obviously this isn't taking itself too seriously, but "Night of the Demons" doesn't deliver good scares or have a lick of wit, so it doesn't come off as horror or comedy, just trash. Nor does co-writer and director Adam Gierasch's uninspired direction for all the mayhem help much.

Of the cast, Monica Keena is the nice girl (who wears a belly-button shirt but doesn't shave down south), but the actress's face looks surgically plastic. She has a few amusing one-liners once she turns into a badass, gun-toting heroine. A dumpy Edward Furlong has seen better days, here playing a drug dealer, Keena's ex. And if anyone saw the original, Lena Quigley makes a cameo as a naughty trick-or-treater greeter. "Night of the Demons" is the kind of movie you would just have playing in the background at a Halloween party.