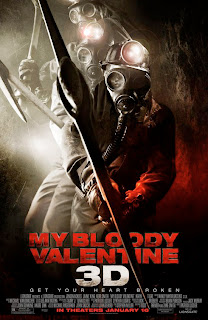 The understandably neglected 1981 slasher pic "My Bloody Valentine" is probably one of the last movies that needed a reprise, but this do-over is a shamelessly bloody, cheesy hoot, laced with the latest gimmicky 3-D technology as a bonus (get your glasses at the video store!). The small Pennsylvania town of Harmony hasn't celebrated Valentine's Day since six miners died in a cave-in caused by the owner's son (Jensen Ackles); the sole survivor, Harry Warden, hacked up a bunch of partying teens in the mine and shortly after Ackles left town. Ten years later, Ackles comes back to sell the mine and reconnect with his ex-girlfriend (Jaime King), who's now married to his old rival/the sheriff (Kerr Smith). Then someone dressed as a coal miner with a gas mask goes pickaxe-happy and starts painting Harmony red.

Patrick Lussier directs "My Bloody Valentine" in 3-D, never taking an ounce of it seriously but giving us a good bloody time, with moderately clever, in-your-face kills and gory shocks, as even an axe and body parts are flung at the camera like you're in the front row of a crazy Gwar concert. In 2-D, the movie offers nothing we haven't seen before, but it is a free-wheeling, gleefully exploitative drive-in throwback to the genre heyday, and much more fun than the usual “gorenography” out there today. Even though we don't go to these kind of movies for acting, logic, or story construction, the acting is on par with '80s B-movies and the whodunit story isn't entirely obvious.

This in-name-only remake hasn't the deepest intentions but does what it sets out to do, with fun scares, laughs, and some tensely creepy set pieces, especially a chase in a grocery store. The uninhibited Betsy Rue should earn some sort of scream-queen prize for her scene of gratuitous nudity as token slut Irene, courageously running around—for a whole five minutes—in her birthday suit until her “close-up.” It's also a nostalgic treat for fans to see '80s horror veteran Tom Atkins ("The Fog," "Creepshow," and "Halloween III") popping up as Officer Burke.