Flashy, diverting "Burlesque" needn't be so long and cliched 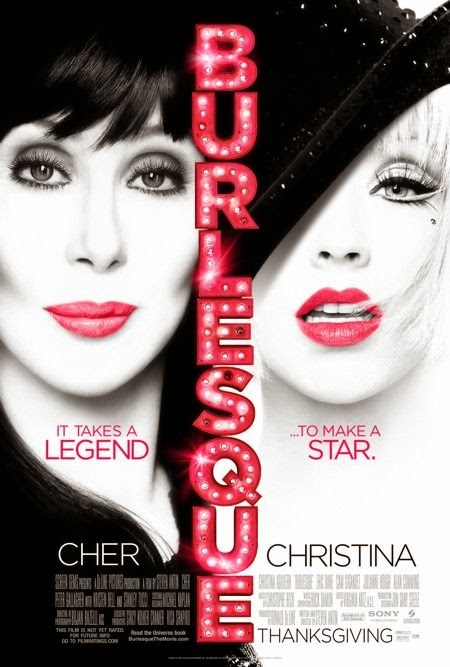 "Burlesque" might be a splashy showcase for pop star Christina Aguilera, as she makes her acting debut. She's about nine years late in doing what Mariah Carey tried doing with 2001's "Glitter," which was more of a crashing bore than a guilty pleasure. That aside, the film tells the oldest story in the book and completely misses the boat on being an all-out campfest like 1995's hilarious trash classic "Showgirls." The feature debut of writing-director Steve Antin (an actor from the '80s and '90s), "Burlesque" has energy in its staging of the musical numbers, enough anyway to make up for shopworn, clichéd scripting. "Burlesque" is adequately entertaining, but it should have either been campier or just less insipid if it wanted any replay value.

Aguilera plays Small Town Girl (or, an ex-waitress from Iowa named Ali) who gets off the bus to the Big City with Big Dreams (or, Los Angeles with dreams the size of her cleavage) when the bump-and-grind sights at a neo-burlesque joint on Sunset Boulevard catch her eye. She gets lucky starting off as a waitress there, and then when she gets gutsy enough, Ali auditions for the bar manager, Tess (Cher). When she uses the vocals that her long-deceased mama probably gave her, the whole lip-sync-showgirl stage is shocked like an earthquake. Whoa Nelly, soul sista's got “mutant lungs” and a star is born. Other plot threads include besotted lead dancer Nikki (Kristen Bell, all bitchy sneers) and her machinations; Tess having to deal with losing the club; and Ali having to decide between a straight bartender (Cam Gigandet) in eye-liner with a six-pack and bedroom eyes or a shady real estate developer (Eric Dane, TV's "Grey's Anatomy").

Yes, "Burlesque" is far from perfect. From the script level and up, the film doesn't leave a stage-drama trope unused and has no business taking two hours. Not even Cher can always rescue some of the howlingly stilted dialogue (“You threw up everything but your memories!” and “I have more to worry about than you pouring Vodka on your Cheerios!” are two of Tess' argumentative points to hot mess Nikki). The cinematography is unappealingly soft-focused and the choreography often gets cut into chop-suey stances. Also, if anyone could turn back time, it would've been nice to have a real showstopper, like, a duet between Cher and Christina. It could have been a dream sequence, too! Other than that, the song-and-dance numbers are sexy and electric, almost in the style of "Moulin Rouge!," "Chicago," and "Nine." All of them are Bob Fosse-esque moves in a Pussycat Dolls music video, and Aguilera performs the best hootchy-kootchy number in nothing but strands of pearls and feather fans. It might not be much, but without deserving so much emphatic hatred, "Burlesque" is flashy, diverting, and utterly indefensible.