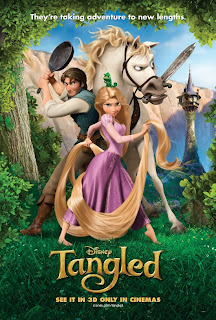 Within the dependable oeuvre of Walt Disney that can do no wrong, "Tangled" proves Happily Ever After never goes out of style. It seems like an animated Disney feature of Rapunzel is way past due, but at long last here we are. And more than just a tolerable sit, "Tangled" is a winning, jubliant, consistently enjoyable surprise.

Sassily voiced by Mandy Moore, Rapunzel is a princess stolen from her palace nursery by a vain witch, Mother Gothel (Donna Murphy), who imprisons her like a hummingbird in a cage of a tower with her long, golden tresses to restore Gothel's youth. Hmm, what kind of shampoo does Goldie use to achieve such luster? By her 18th birthday, Rapunzel dreams of being free and seeing the floating lights in the yonder sky that she believes are meant for her. But "Mother" says the world is too dangerous and cruel for her. Then she gets the chance to escape (with her skeptical pet chameleon Pascal in tow) when rogue, dashing Flynn Ryder (Zachary Levi) climbs into her tower to escape from ruffian pursuers. Knocking him out with a frying pan, she then offers Flynn a bargain: if he acts as her guide in the new world below, she'll return to him his satchel that contains a crown.

Directors Nathan Greno and Byron Howard bring a timeless quality to "Tangled," as does screenwriter Dan Fogelman who has all of Wilhelm and Jacob Grimm's fairy tale pieces in place and gives them a fresh, hip sensibility. Moving fast out of the gate, with a witty voice-over narration, the film is brisk and never even a hair pushy as the "Shrek" sequels have been getting with their flash-in-the-pan pop culture references. Moore makes Rapunzel an irresistible Disney princess; Zachary Levi (of TV's "Chuck") is handsome and even a bit cocky, amusingly floored by the way his nose is drawn in his picture on Wanted! posters and trying to win Rapunzel over with smoldering looks. As Gothel, Murphy is a firecracker, hilariously condescending, egotistical, and truly malicious, and turning her into one of the more complex and scary Disney villains. The biggest laughs are thanks to Maximus, a royal, no-nonsense police horse; he doesn't talk but it's all in his deadpan facial expressions.

The hand-drawn animated aesthetics are bright and beautiful, the core romance is actually romantic and has our full emotional investment, and the sporadic action is more exciting than some live-action films (and later on in the film, a little violent). Alan Menken's songs aren't quite up to his "Part of Your World" and "A Whole New World" but they work. Gothel's elaborately staged "Mother Knows Best" is a show-stopper, and "I"ve Got a Dream" performed in a pub full of thugs is a delight. Capturing real enchantment is the Oscar-nominated duet, "I See The Light," performed by Moore and Levi, as Rapunzel and Flynn watch the lanterns lift into the sky around the Cinderella-like castle.

Following "The Princess and the Frog" and "Toy Story 3," with the precedence of memorable characters and voice performances based on character rather than celebrity, "Tangled" marks magical proof that Disney can still make 'em like they used to. What a happy beginning for a new classic.