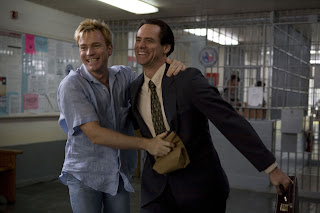 Based on the incredible true-life exploits of Steven Russell and adapted from the book by Steve McVicker, I Love You Phillip Morris is sort of a gay Catch Me if You Can that showcases an interesting performance by Jim Carrey.

Steven Russell (Carrey) was brought up as a conservative Christian in a small Georgia town, but showed his inner con-man early on working as a policeman and using the database to find out his birth mother put him up for adoption. Then he has an epiphany after a car crash: he's gay! Ditching his devoutly religious wife Debbie (Leslie Mann) and job, he packs for Miami and gets a lova (Rodrigo Santoro). Steven discovers “being gay is really expensive,” so he turns to fraud to fund his lavish lifestyle. When he goes to state prison for his crimes, he meets and falls for his fellow cellmate, the blond, soft-spoken Phillip Morris (Ewan McGregor), who becomes his soul mate. Once Steven gets out, he schemes to spring his lover out of the slammer too and keeps on conning.

With his big smile and elastic face, Carrey slips into his manic rubber-faced shtick once in a while, particularly during the con games. It's still showy Carrey, but his Steven is a challenging nut to crack. The slippery, conniving character runs in circles, swindling, getting caught, escaping jail, and then repeating the process.

Glenn Ficarra and John Requa, the Bad Santa writing team making their directorial debuts, have a good story based on fact to tell. Now their script may whizz through some of the details, but it matches Steven Russell's mask, portrayed through Carrey: he's a man who's always living a lie. With a guiding hand, their pinballing jump in tone is appropriate for this story, making the film a bit of a scheme itself.

Starting off brisk and outrageously funny with an offbeat jokiness, I Love You Phillip Morris gets more tragic and does sometimes take itself seriously but rightfully so.

McGregor assumes a fragility and sweetness to Morris, but his character is lied to by Russell, just sitting at home and answering to his man, that their devotion to one another doesn't always make sense. Luckily, Carrey and McGregor share a believable chemistry that does up the emotional component so we care about this narcissistic man and his lover.

I Love You Phillip Morris is a tricky piece of work, and Carrey should've been reigned in for more Steven Russell and less Carrey mania, but both he and the film are well worth well checking out, even if its release was held back over a year for being “too gay” for distribution.