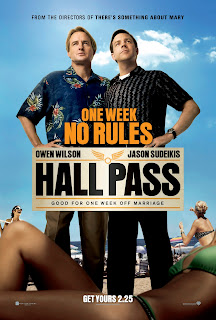 
One can usually count on Peter and Bobby Farrelly to dig up some crude, memorable laughs in their films, their previous outing "The Heartbreak Kid" just a painfully unfunny speed bump in their hopeful road back home. A horny schlub comedy like "Hall Pass" should have been a barrel of laughs in your belly, but it's more like a kick in the pants. Owen Wilson and Saturday Night Live's Jason Sudeikis (in his first lead movie role) play Rick and Fred, dorky best pals in suburban Providence who are happily married but ya know, their eyes wander from time to time.

When their respective wives (Jenna Fischer and Christina Applegate) get fed up with their hubbies' immaturity, they decide to call their bluff, issuing weeklong “hall passes” so both men get the unsupervised, guiltless sexual freedom out of their system. (This is apparently normal as the setup is explained by their psychologist friend, played by an oddly cast Joy Behar.) Anyway...wa-hoo! Rick and Fred get excited to live it up and get so much tail, but (as the joke goes) forget how to swing, and (as the moral goes) learn to abide by traditional domestic values. Meanwhile, the wifies are in Cape Cod, where they decide to have their own freedom with a baseball team.

It's not that "Hall Pass" basically saying all men are pigs and women are nags is the film's failing, it's that all the comedy either feels mild, lame, or just plain lazy. The Farrelly brothers work from a script they co-wrote with Pete Jones and Kevin Barnett, and while sentiment is often expected from the Farrellys, this time they seem to be such softies that they try not to embarrass themselves with too much gross-out crudeness or comic surprise. What's so fun about our heroes finding out that infidelity is bad? Wilson and Sudeikis are playing such putzes that it's easy to laugh at them; if only there was more to laugh about. The pot brownie hijinks are stale, penises aren't funny when they just flash themselves at the screen, and a Fat Guy character popping a squat in a golf course sand pit has no setup for the payoff to sing. The jokes certainly land, but many land with a forced thud or dead air. And a climactic car accident and subplot involving a jealous loser with a gun feel incongruous.

The freshest touch is the TV's “Law & Order” dun-dun sound effect cued to each title card of the guys' week of shenanigans. Some of the pick-up lines earn chuckles, as does their Applebee's pickup joint turning into a food coma; there's a quick bodily gross-out with a party girl that can't vomit; and Richard Jenkins steals the most laughs as a wrinkly-skinned swinger. Of the women, stunningly beautiful Aussie native Nicky Whelan displays much charisma as a sweet barista that catches Rick's eye. Applegate and Fischer (who is so badly lighted and looks fake-baked) are smart, funny women, but you would never know here by the writing, especially in Fischer's case.

The Farrellys have certainly made some hilarious and ticklishly demented comedies since breakout successes like "Dumb & Dumber" and "There's Something About Mary." Like all their work, the gross-out kingpins again straddle the line of their broad, raunchy stuff and cross-on-their-heart sweetness, twofers that recall the guys' glory days. But in a case of diminishing returns, "Hall Pass" is a disappointing misfire because these guys, never about subtlety or taste, are either growing up or aren't trying. Either way, this sex comedy feels too safe and is too afraid of sex. Sneaky move on the trailer cutter's part though; they saved all the decent laughs for the ads. Grudgingly, you can pass on "Hall Pass."