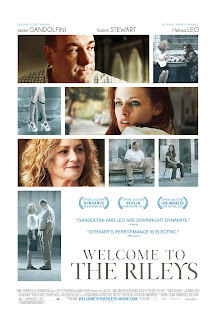 In the well-acted, melancholy melodrama "Welcome to the Rileys," James Gandolfini and Melissa Leo give affecting performances as Doug and Lois Riley, an Indiana couple married for 30 years who have been struggling since they lost their 15-year-old daughter. They have their own ways of grieving: He's taken comfort in a local waitress and cries/smokes in the garage, while she's an agoraphobic from feeling guilty. While on a plumbing sales trip in post-Katrina New Orleans, Doug meets a hardened, foul-mouthed underage stripper named Mallory (Kristen Stewart, in her rawest, non-"Twilight" turn to date) who needs order in her life. He “adopts” her as if she was his own daughter, and this is when Lois decides to finally get out of the house and meet her husband. Mallory is a runaway without a mom and dad, and Doug and Lois become her healing force and vice versa. Initially, Stewart's trampy, bruised-eyed, rebellious Mallory insisting on giving Gandolfini a lap dance is creepy and the relationship isn't plausible at first blush.

Ya'll can relax though, as Doug doesn't become Mallory's sugar daddy; it ends up being paternal, not sexual. But if you think about it, this is like "Taxi Driver," aside from Doug being nicer than both Tony Soprano and Travis Bickle and there never being any bloodshed. And Leo, having the toughest job here, never overplays her delicate-flower Lois, even if her leaving the house to drive to Indiana gets a few laughs. Actor-turned-screenwriter Ken Hixon's script touches on grief, loneliness, healing, and redemption, and expresses these themes in a way that never feels sentimental or tidy. The sensitive direction of music-video award-winner Jake Scott (son of Ridley) and the very good performances turn "Welcome to the Rileys" into something heartfelt and hopeful.