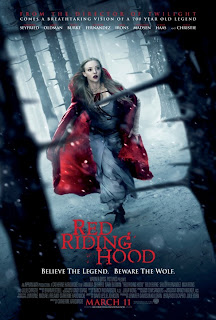 You've got to wonder who "Red Riding Hood" was made for because it's no Disneyland bedtime story and not much of a horror film. Hmm, teen angst, werewolves, and a girl torn between two of the best lookers in her town. Why, this sounds like the same neck of the woods as director Catherine Hardwicke's last film ("Twilight"). In basic terms, Red Riding Hood is "Twilight" in wolf's clothing that panders to fans of the Bella-Edward-Jacob love “twiangle.” Even on its own terms, this is a lumbering, lifeless revision of the grim, phallic fairy tale.

Yes, the basic premise is still intact: A girl in a blood-red cloak with a basket goes over the river and through the woods to her grandmother's house. But there's “more” going on here, and it's less interesting. This time, the Girl in Red gets a name. Valerie, the virginal but lusty blonde, is played by the saucer-eyed Amanda Seyfried (and what good casting, considering what snow-white skin and big blue eyes she has). Her village of Daggerhorn is plagued by a werewolf, long before her sister is even killed. Valerie's hot for the hunky, bad-boy woodcutter Peter (Shiloh Fernandez), who has a meet-cute while trapping a bunny for hunting boots, but she's arranged to betroth a nice boy with money, Henry (Max Irons, Jeremy's son). Valerie apparently has a psychic connection with the werewolf that draws her to accusations of witchcraft, summoning wolf-removal specialist and clergyman, Father Soloman, hammed up and slimed up by Gary Oldman, who orders guilty parties to his bronze chamber, The Elephant. As he warns on the night of the Blood Moon, the wolf is no outsider but could be anyone's neighbor or wife, and the whole village is on edge.

No one is above suspicion, which makes "Red Riding Hood" turn into a whodunit with a bunch of red herrings piling up. Could it be Team Peter or Team Henry, or her mother with a secret (Virginia Madsen) or papa (Billy Burke, yes the same actor cast as Bella's cop pops)? Maybe it's Soloman, who has sharp, gray, wolf-like fingernails? Or perhaps it's Valerie's New-Agey, brown-eyed granny (Julie Christine in dreadlocks)? You'll hardly care as you give up and wait, and once it's revealed, it doesn't make a whole lot of sense anyway. The romance is an emotionally bankrupt snooze, although Seyfried and Fernandez cook up some heated action in a bale of hay (tsk, and Bella is still waiting 'til marriage). Otherwise, Irons and Fernandez are handsome pieces of interchangeable furniture, except one has dark, gelled hair and the other dirty blonde. The whole cast is directed to remain stone-faced, like they're in a bad dinner theatre at a Renaissance Faire, thanks to David Leslie Johnson's silly, humorless script. 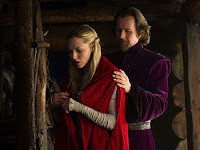 The filmmakers get in the “Grandma, what big eyes you have...” schpeel, and it's amusing but unimaginatively saved for a dream sequence. There's even a brief nod to the 17th Century French version (that's even before the Brothers Grimm) with cannibalism, but it's flicked away within seconds. The medieval costumes and misty, wintry production design are stylized and pretty, even if shot on soundstages in Canada. And the swooping helicopter shots of the green forests imprint a sense of atmosphere, and a sense of déjà vu reverting back to Forks, Washington. Then there's the Big Bad Wolf, a fake CGI creation that doesn't provoke any threat. (A conversation he shares with Valerie, in his Lord Voldemort tone of voice, will have you in stitches.) So why can't anyone make a less cheesy werewolf anymore? Where's Rick Baker when you need him? "Red Riding Hood," what little brains you have! For the filmmakers' sake, hopefully there's more of a happy ending to next year's "Snow White" revision with Kristen Stewart, but in the meantime, check out 1996's "Freeway," a wildly twisted, grimly funny twist on "Little Red Riding Hood" with a pre-famous Reese Witherspoon.