The scariest thing about "Scary Movie" is how shrewd this parody is, even down to its primary target's Dimension Films backer, and how flat-out tasteless it can be. But not NC-17 tasteless as criticized. The Wayans brothers' cheerfully lowbrow, often clever spoof of "Scream" (itself a half-spoof and originally titled "Scary Movie"), "I Know What You Did Last Summer," and the horror genre clichés is to the Wayans' "I'm Gonna Git You Sucka" for what they did for the blaxploitation genre.

Sloppy, silly, raunchy, and offensive, yes, but sometimes undeniably funny, "Scary Movie" is filled to the gills with the kind of references and in-jokes that only the sharpest horror buffs will pick up on. Keenen Ivory Wayans directs (and gives a small bit in a movie theater trailer poking fun at slavery epic "Amistad"), while brothers Marlon and Shawn star and ham it up, respectively, as the token stoner sidekick Shorty and the closet-homosexual jock Ray who likes sticking his fingers into orifices that belong to anyone besides his own girlfriend Brenda (Regina Hall).

Carmen Electra gamely opens up the first scene in the first-victim Drew Barrymore role from "Scream," harassed over the phone, picking up a banana as her weapon of choice, chased in her white brazier and panties through a sprinkler, stabbed in the breast implant, and then killed off. The cast all keep their straight faces on, making it that more funny: newcomer Anna Faris throws tons of wide-eyed, banana-headed enthusiasm into the virginal Neve Campbell role of Cindy Campbell; Cheri O'Teri is a hoot as the snappy, stop-at-nothing reporter Gail Hailstorm (could she be mocking Courtney Cox's Gail Weathers?); and improv comic Dave Sheridan out-dumbs David Arquette as a retarded cop.

Just when we thought the spoof genre ran its course, "Scary Movie" sneaks up on us with enough gross/funny/stoopid gags (and a penis or two). From the "Airplane!"/"The Naked Gun" school, with a hint of the Farrelly Brothers, the Wayans have a ballsy, anything-goes abandon—it's a comedy that knows how smart to be about how dumb it is. 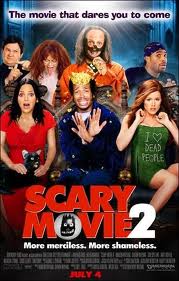 The same movie makers behind the spoof sequel regurgitation "Scary Movie 2" lied with their first movie's tagline, “No sequel.” Shawn, Marlon, and director Keenen Ivory Wayans, along with the seven writers, are strictly out to cash in this slovenly rush job as "The Haunting," "The Amityville Horror," "Hollow Man," and "What Lies Beneath" are just a few of the horror movies that step up to be skewered. Again, the jokes only work if you've seen the movies being spoofed. Even then, most of them fall flat.

For the string of story, damsel-in-distress Cindy (Anna Faris) and newcomers are tricked by their oily professor (an underused Tim Curry) into staying the night inside the haunted Hell House. Chris Elliott as the grossly disfigured butler is initially amusing, but the same gross-out bit with his small hand is used over and over until it ain't funny anymore.

This is a depressingly sophomoric sequel. What follows is a parade of alarmingly crass, lame penis jokes and homosexual stereotypes, and lots and lots of bodily fluids. That's right, semen, urine, you name it, this movie's got it. Despite it having nothing to do with the proceedings, nothing comes close to the stray, raucous amusement aroused in the opening riff on "The Exorcist" (with James Woods doing a spin on Father Merrin, Natasha Lyonne as the possessed Regan, and both sharing a contest of who can projectile-vomit more pea soup). The clever, giggly bawdiness is sorely MIA in "Scary Movie 2." 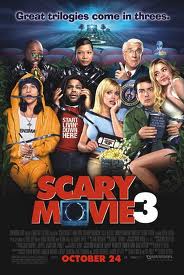 Anna Faris and Regina Hall, the only returning cast members of the first two "Scary Movie" movies, get caught in an invasion by aliens that leave mysterious crop circles on minister Charlie Sheen's farm and discover the existence of a videotape that kills you when you watch it.

Now having "Airplane!" creators David Zucker and writer Jim Abrahams on board, "Scary Movie 3" is a slight improvement over the last installment. This fast, goofy, if threadbare third go-round to an already dead franchise spoofs "Signs," "The Ring," "The Matrix," and "8 Mile" (even though these obviously aren't all "scary movies"), with yet another cobbled-up story clotheslining a string of lowbrow jokes.

The opening "Ring" parody with Jenny McCarthy and Pamela Anderson is silly and slyly funny, but then the rest of the movie starts; you know you're in trouble when the opening scene is the funniest set-piece. Gags about pedophillic priests and Michael Jackson aren't shocking or amusing, just in bad taste. Leslie Nielsen, here playing the dim president, still has his deadpan flair for comedy that he showed in "Airplane!" and "The Naked Gun" movies. More misses than hits, but the jokes come at such a fast-and-furious pace that when one falls flat, a few more are around the corner. 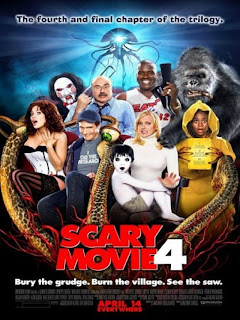 David Zucker and Jim Abrahams are back to old school form, spoofing "Saw," "The Grudge," "War of the Worlds," "Million Dollar Baby" and "The Village," with the cluelessly wide-eyed Cindy Campbell (Anna Faris) becoming caretaker for a haunted house during an alien invasion. Craig Bierko has the right comic timing and dead-ringer looks of Tom Cruise.

An obligatory if scattershot-funny sequel of the "Scary Movie" franchise that has long run out of gas, "Scary Movie 4" is chock full of cheap, goofy laughs relentlessly coming and going like junk food. The story is surprisingly smoothly constructed, even if it's only the foundation for jokes. The "Saw" spoof opening with Dr. Phil and Shaquille O'Neil has some giggles, as does the "Grudge" spoof with Charlie Sheen, a bottle of Viagra, and a high-rise splat to his death. There's a "Brokeback Mountain" spoof, featuring petroleum jelly, salty nuts, and a tent while two gay black cowboys serenade each other to Lionel Richie's "Hello," that's amusingly warped at first but then goes on past the funny mark.

Not much freshness in its aimed targets, relevance to "scary movies" or comic consistency, but if you have a taste for silly humor (and have been waiting to catch the sight of Leslie Nielsen's 80-year-old rear end) and you've seen the movies being parodied, this may hit the spot for an old times' sake.