Bloody, meta "Scream 4" worth the wait 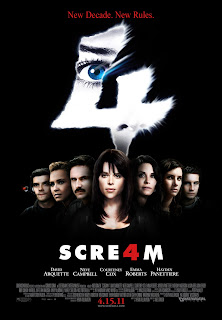 Back in 1996, when VHS was still "in" (which in Hollywood or Best Buy years feels like a century), "Scream" was a game-changer that had its finger on the pulse of horror movies. The sleeper hit playfully deconstructed the slasher genre, along with its successful sequels that poked fun at sequels and trilogies. So now, eleven years after the last stab-a-thon and four spoofy "Scary Movies" later, "Scream 4" goes back to the original teaming of director Wes Craven and writer Kevin Williamson to tackle remakes. And like sharpening an old knife, they give us a deathlessly entertaining and knowingly smart reboot, or a "screammake" if you will, that's even more of a definitive and post-modern "shriekquel" than 2 or 3. What a difference a decade can make. Despite press claims of shooting before the script was finished and reported reshoots, "Scream 4" will exceed the expectations of fans as a revitalization ("New decade, new rules.") of the slasher genre and these self-aware horror movies themselves. Not to get too "meta" on you, but "Scream 4" is a scream times four.

Off the top, as that Dimension Film logo comes up and the white landline phone rings (who has landlines anymore?), you won't be able to wipe the big smile off your face. In comes the shrewdly twisty, hilarious, brutally bloody movie-within-a-movie opener with cameos from Anna Paquin and Kristen Bell, among other starry cuties, who complain about the based-on-"Scream" Stab movies ("Sequels don't know when to stop"…"Stick a fork in 1996 already!"…"there's no element of surprise"). Not since Drew Barrymore got gutted in the original's iconic set piece, Craven and Williamson have outdone themselves in terms of a high body count and inventiveness inside this triple-whammy surprise in all of 10 minutes.

When the story proper begins, it's the 15th anniversary of the original massacre and Sidney Prescott (Neve Campbell), no longer a victim, returns to her hometown of Woodsboro (now filmed in Michigan) on a book tour, promoting her cathartic survivor memoir. Still in town are Dewey Riley (David Arquette), now the sheriff, and his wife, Gale Weathers (Courtney Cox), who's now retired from journalism and turned to fiction writing but going stir-crazy, until the latest murders bring out her opportunist side again. Two bloody murders and ring-ring calls later, Sid must stay in town for the investigation with estranged cousin Jill Roberts (as in Emma Roberts, who gives a star-making performance) and Aunt Kate (Mary McDonnell). On cue, Ghostface is only a phone call away to carve up Sid, Dewey, Gale, and the group of newbies. What Dewey says is true: "One generation's tragedy is the next one's joke." The new iPhone-generation kids on the chopping block are even savvier and snarkier movie buffs than the ones from the '90s. Hayden Panettiere plays Jill's bestie Kirby, a badass babe with a Brigitte Nielsen haircut and a pointy chest who knows her movie trivia and can even list off all the horror remakes when her life is on the line; Marielle Jaffe is Jill's next-door neighbor; Nico Tortorella is the Billy Loomis-esque ex-boyfriend; and Erik Knudsen and Rory Culkin are the funny, know-it-all hosts of their high school's cinema club who break down the new rules for survivial in a horror movie.

Rounding out the cast with comic relief are Marley Shelton as clingy Deputy Judy Hicks, pining after Dewey; Alison Brie as Sidney's heartless publicist who, naturally, will get what's coming to her; and Anthony Anderson and Adam Brody as those inept cops who wouldn't die if they were Bruce Willis. Red herrings abound, or as Jamie Kennedy's Randy once said, "everybody's a suspect!" Principal cast members Campbell, Arquette, and Cox return like old friends at a reunion, building upon the roles they created 15 years ago. (Arquette and Cox's characters mirror the ex-couple's real-life marital problems; they fell in love on the set of the first "Scream.")

Craven and Williamson know what they're doing: the stalking suspenseful, the slashing-and-gashing very bloody, the pacing tight and efficient, and the writing cleverly smart as ever, with the whodunit twist a doozy, surprising as it is twisted and sick. Not only is anyone in the cast not safe, name-checking includes "Top Chef," the "Saw" movies, "Shaun of the Dead," Robert Rodriguez, but the fad of 3-D technology is surprisingly left out of the mix. Even before you think it can't any more self-referential or end soon enough, one character cutely says "this is just silly" and calls the climax-on-top-of-climax "an alternate ending." With commentary riffs on fame, technology, dreaded remakes, torture-porn, and itself, "Scream 4" is proof that the series has enough meta humor and startling jolts left in its arsenal for a fifth. Isn't that what you kids dig in your favorite scary movies?