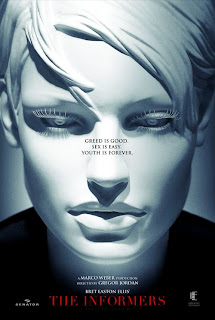 The pointless and dismal "The Informers" is one of those seamy Bret Easton Ellis movies, only vacuously so, that urges you to jump in the shower for a rub-a-dub-scrub after enduring it. All of its decadent, hollow, debauched characters desire sleeping with anyone and everyone, drugs, wealth, fame, and listening to Pat Benatar—and the adults are prime unfit parents. Author Ellis and Nicholas Jarecki adapt Ellis' 1994 novel, set in 1983 Los Angeles, and it's mostly a collection of too many characters with soap-opera stories that have no connection and no discernible meaning: why should we give two hoots about these bored damaged goods?

As our “protagonist,” a bland Jon Foster plays the bisexual drug dealer, Graham. His dad, miserable Hollywood bigwig William (Billy Bob Thornton), is trying to get back together with his mom, long-suffering pill popper Laura (Kim Basinger), while continuing his affair with news anchor Cheryl (a jittery Winona Ryder). One of Graham's buddies Tim (Lou Taylor Pucci) is vacationing in Hawaii with his lecherous father (Chris Isaak). As if that's not all sordid and messed-up enough, pre-comeback Mickey Rourke (typically looking in need of a shower) as a drifter kidnaps and sells kids. And it's unfortunate this has to be the late Brad Renfro's memorial-farewell picture, playing a twitchy would-be actor doorman, after dying earlier in the year of a heroin overdose. Amber Heard as Graham's polyamorous play thing Christie struts around without a shirt, much less undies, so the film can get in its gratuitous nudity.

For the record (or if you care), the film contains no vampires (!) from the novel, but bloodsuckers might've been more interesting than all these thinly written soulsuckers. Director Gregor Jordan shoots his film with a glossy sheen (possibly symbolic of the characters' superficialty?) and there's nostalgic '80s music, but that doesn't stop "The Informers" from being "less than zero."