Alex Pettyfer blanks out in "Beastly" and "I Am Number Four"

Disclaimer: Really, it makes no difference which movie came first. "Beastly" and "I Am Number Four" both star Alex Pettyfer, both stink, and both offer the same one-note performance by Mr. Pettyfer: Give a smug smirk, remove shirt, sulk, repeat. 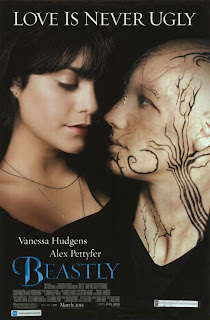 The lesson learned in the teen-emo modernization of "Beauty and the Beast" is that true beauty comes from within. So how hypocritical to find that the mediocre "Beastly," based on a novel by Alex Flinn, features no uglies, just extremely attractive people. Alex Pettyfer, just seen in last month's "I Am Number Four," plays Kyle, a rich, perfectly good-looking, and obnoxiously arrogant jerk with a sculpted physique and a cocky mouth on him. He's the offspring of an even more vain news anchor (Peter Krause) and running for class president at his posh Manhattan prep school, preaching that looks are the only thing that matter in life. When Kyle jilts witchy classmate Kendra (Mary-Kate Olsen), she spitefully casts a spell on him that renders him "unattractive," transforming Kyle into a skinhead with facial scars and tattoos. If he doesn't find someone to love him within a year, he will remain ugly forever. Sucks, dude. Dad can't deal with his son's new looks so he promptly moves Kyle into a private brownstone with sprawling city views. Along with him comes his Jamaican housekeeper (Lisa Gay Hamilton) and a new blind tutor (Neil Patrick Harris), and eventually through unbelievable circumstances, a bookish classmate named Lindy (Vanessa Hudgens) moves into the attic of his apartment. He now goes by the name "Hunter," and Lindy is so smart she can't even recognize her long-time pupil's voice or face beyond the scars. Once Kyle unveils his eyesore face to Lindy, she clunkily states, "I've seen worse." And for a bohemian girl who claims to live by "substance over style," she could've fooled us.

"Beastly" is all surface, like Kyle. Written and directed by Daniel Barnz, the writing is sloppy and doesn't follow through on story threads that count to make the lesson pop. But hey, the movie looks as slick and glossy as Pettyfer's six-pack abs, so nothing else should matter. Pettyfer is handsome in a chiseled model sort of way, but when siding with someone who lacks a definable arc, it might have helped to cast a more talented and charismatic performer. When we first meet Kyle, he's doing push-ups and working out in his underwear while the soundtrack pops along to Lady Gaga's "Vanity" song with lyrics like "Look at me." How on-the-nose can you get? All Hudgens brings to the part of Lindy is a sweet smile, but her wooden delivery looms large. Dressed like Lady Gaga and Stevie Nicks, Olsen ridiculously slinks around in platform heels, but at least she's amusing and more interesting than the two blank leads. Luckily, Harris saves the day with his lively, sarcastic performance. Otherwise, the "Twilight"-style romance is a fizzle, feeling so chaste and half-assed that you'll hardly care if the beast snags the beauty. Perhaps "Beastly" could've used a talking teapot, candlestick, and clock to liven up this simpleminded fairy tale. 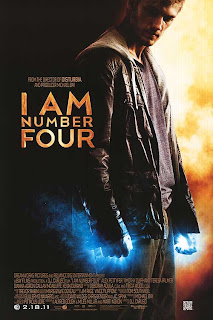 Conceived as the upstart of a franchise, "I Am Number Four" comes off as a well-produced CW pilot follow-up to "Smallville" for the "Twilight" demographic but with hot, glowing aliens, not hot, sparkling vampires. Based on a young-adult novel by Jobie Hughes and James Frey, but published under the pseudonym "Pittacus Lore," this teen sci-fi/fantasy soap sets up the premise of nine branded aliens from the planet Lorien fleeing to Earth after their race was annihilated by the vicious, toothy, trenchcoat-wearing Mogadorians. When aliens Number One, Two, and Three are hunted and killed, the handsome Number Four (Alex Pettyfer), his guardian-warrior-pretend dad Henri (Timothy Olyphant), and shape-shifting lizard/beagle go on the run. Living in Ohio, Four tries blending in at his high school by "keeping a low profile," but his name is "John Smith," he throws a football real hard, and his hands emit energy beams during science class. He instantly catches sight of demure artsy girl Sarah (Dianna Agron), clashes with the football bully, and befriends a UFO-obsessed outcast (Callan McAuliffe). But John's number is up as the Mogadorians are in quick pursuit because his cool powers make it to YouTube.

"I Am Number Four" has some intriguing elements, a neat opening aerial shot and a nifty scene inside a haunted-house attraction, and a poppy soundtrack. Director D.J. Caruso makes sure the pace never lets up, but the high-school drama is like a lame after-school special and the dimly lighted action on the bombastic scale of a Michael Bay movie (naturally, he produced this movie). While it is watchable, everything feels taken from somewhere else that it's too generic for much excitement to take shape. British "It" heartthrob Alex Pettyfer is pretty and muscular but does more preening than acting; he's too vacant. The very photogenic Agron makes a sincere, appealing transition to the big screen from her good work on TV's popular "Glee." Refreshingly, her anti-cheerleader Sarah is written with more free-thinking intelligence than most female roles. Olyphant brings his usual level of intensity but disappointingly has very little to do. Finally, Theresa Palmer (who keeps her lovely Aussie accent this time) gets a lot of posey moments throughout, one a slo-mo walk as a house explodes behind her. A creature-filled climactic showdown set at the school is mindlessly entertaining, with Palmer awesome as the badass-chick Number Six with a sharp mouth, but by that time, the story has become so dopey and half-baked in its telling, leaving John a bystander to Number Six's fight. Perhaps if there's a sequel, which there probably will be, the filmmakers should kill off the pretty-boy six-pack model and give Number Six her own movie. She's Number One.