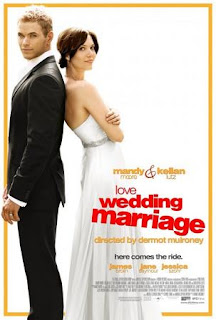 Love, Wedding, Marriage (2011)
91 min., rated PG-13.
Grade: D
As a leading man of romantic comedies himself (let alone with "wedding" in the title), Dermot Mulroney should've known better than what he phones in as his directorial debut. That would be "Love, Wedding, Marriage," the ball-and-chain rom-com that's too sitcommy to be insightful and too unfunny to be a sitcom and ends up just being an insult to sitcoms.
Mandy Moore, who's still kissing all the frogs to find her prince of a great romantic-comedy (does Disney's "Tangled" count?), plays Ava, a hopeless-romantic marriage counselor who thinks she knows all about love because of her seemingly happy parents (James Brolin and Jane Seymour). She's just tied the knot to her wine-connoisseur beau Charlie ("Twilight" hunk Kellan Lutz), who likes mayo on his toast (weird!). But as soon as her parents announce they're planning to divorce, Ava makes it her mission to fix their marriage just as their 30th wedding anniversary celebration is right around the corner. If Dad's harboring a secret, could Charlie be keeping something from Ava too?
Mulroney makes sure we've seen it all before, from the unfunny drunken karaoke scene to trivial, unbelievable arguments about men not changing the toilet paper rolls to finally the lame-ass outtakes. Every character deceives another with climactic revelations, but it all works out with a laughably clichéd "I'm sorry" scene.
Moore does her usual strained, pouty looks, but her Ava is less than lovable. Less of a professional than just a spoiled, hypocritical woman, Ava makes a suicide-attempt 9-1-1 call to get Mom and Dad back together. Now is that really a leading lady we want to see ending up happily ever after? As for Lutz, he could be nominated for Sexiest Shirtless Man Award, but he's a wooden actor with the chops of high school theater. Brolin and Seymour are given dimwitted characters to play, he exploring Judaism and she trying speed-dating. And yes, there are the wacky supporting players in the form of Michael Weston as Charlie's skirt-chasing best bud and Jessica Szhor as Ava's slutty younger sister with issues. Finally, Christopher Lloyd and Colleen Camp embarrass themselves in gag cameos as marriage counselors.
"Love, Wedding, Marriage" should be annulled so this cast didn't have to waste its time and our time.