New on DVD/Blu-Ray: "The Lincoln Lawyer," "Source Code," and "Sanctum" 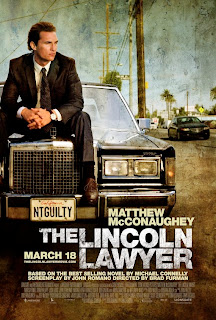 Smugness fits Matthew McConaughey like a glove. Better known for taking his shirt off and secreting that oily, surfer-dude charisma, the hotshot star returns to the courtoom that put him on the map (with 1995's "A Time to Kill") in the film adaptation of Michael Connelly's legal crime-thriller "The Lincoln Lawyer."

Here, he's in a role that feels tailor-made for him as Mick Haller, a slick, wheeler-dealer defense lawyer in Los Angeles (not Lincoln, Nebraska) who operates out of the backseat of his chauffer-driven Lincoln Continental. He has street smarts and thinks he has it all figured out. Then on a referral from a bail bondsman (John Leguizamo), Mick's latest client is a thirtysomething Beverly Hills rich kid, Louis Roulet (Ryan Phillippe), who swears innocence against charges for savagely beating a prostitute (Margarita Levieva) that he met in a bar. But he may or may not be guilty, and may have some connection to a case Haller worked on years before. Mick finds himself torn between dedication to his client and his growing suspicions. 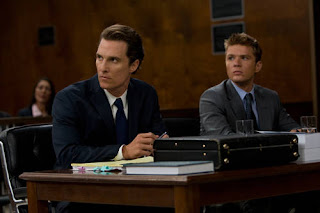 This is McConaughey's show all the way. With that swagger, tex-mex drawl, and slickster smirk, he's entirely magnetic and convincing as the wily but somewhat morally upright Mick. He gets back-up from an ace supporting cast that includes Marisa Tomei as his prosecutor ex-wife, William H. Macy as his sardonic investigator best friend, Michael Pena as a former client in the slammer, and Frances Fisher as Roulet's haughty mother. They may not all be utilized to their potential, but they give it all they got.

Though "The Lincoln Lawyer" lays its whodunit cards pretty early and sometimes feels like a too-traditional courtroom TV episode, it's still a well-plotted and solidly entertaining thriller. The courtroom interaction between Josh Lucas and McConaughey pops and the suspense never ceases as there are twists to the very end.

In his first feature, director Brad Furman handles his actors well and Los Angeles is shot in a realistic, unglamorous light. Written by John Romano, the script has a tough task to entirely crack Connelly's book on screen, but the narrative is streamlined without getting convoluted or too formulaic (Roulet brings up his daughter's soccer practice but never puts her in danger) or stretching credulity.

Judging by "The Lincoln Lawyer," which is as good as any John Grisham movie, more of Connelly's work should be translated to the screen. 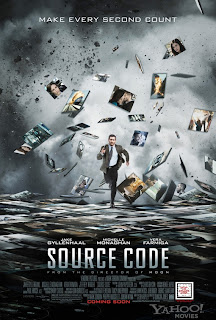 Out of Hollywood, it's rare to find a popcorn sci-fi thriller that actually makes you think. What a concept! Getting his foot in the door with 2009's "Moon," Duncan Jones (son of David Bowie) skillfully follows it up with "Source Code," a brainy, ingeniously crafted, and engagingly fun puzzle. It's so complex and layered that you're not sure if there are plot holes or if you're just dense.

Helicoptor pilot Captain Colter Stevens (Jake Gyllenhaal) has one hell of a commute: he inexplicably wakes up on a Chicago train across from a cute girl (Michelle Monaghan) he apparently should know and keeps calling him "Sean." Once the train explodes into fireballs, he wakes up again but in some sort of confined pod. As it turns out, but without giving much more away, Stevens is part of an experimental procedure where, in someone else's body, he's tasked to find out who on the train has planted a bomb that eight minutes later will blow up the train he's on. His only contact in this pod are faces on a video monitor, belonging to Air Force Officer Goodwin (Vera Farmiga) and scientist Dr. Rutledge (Jeffrey Wright), who inform him that it's not time travel but "brain reassignment." So each time it's Beam Me Up Scotty and he must uncover more information each passage of eight minutes on the train.

Who bombed the train? Well, the stakes are higher than the identity of the bomber.

The structure of "Source Code" calls upon "Groundhog Day," as if Punxsutawney, PA blew up every day at the end of Sonny & Cher's "I Got You Babe" for Bill Murray.

Screenwriter Ben Ripley's premise is compact and yet not just a shallow nugget of an idea but underscoring existential ideas about righting wrongs and the unpredictability of life. The same 8-minute scenario playing over and over could've indeed felt repetitive, and there are a few lulls of exposition from Goodwin and Dr. Rudledge, but director Jones varies the pacing and style of each. 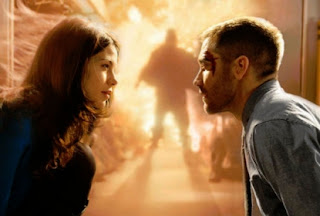 Gyllenhaal puts a lot into this role, running the gamut of wrenching emotions to panic, anger, and a sense of humor, that we share a lot of investment in Stevens/Sean. Monaghan is fetching as Christina, even if she's more of a chess piece than a fully formed character. Farmiga proves how fully capable she is of creating depth, even in a role never in the same space as the lead actor. Wright brings a strange, almost broad villainy to the puppet-master role that keeps him interesting. Also worth mentioning is Scott Bakula's voice as Stevens' father ("Quantum Leap," hello?), and stand-up comic Russell Peters playing himself as a train passenger is a nice touch.

Even by the end, where the gimmick shows a few kinks in its design and has two more endings than it really needed, "Source Code" excites and hurts your noggin in a good way. Hook, line, and sinker, it would've made Hitchcock blush. 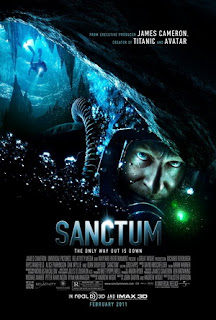 Before you cave in to see "Sanctum," realize that just because James Cameron has his name all over it, he's relegated to merely a producer credit. Seeing as how he has water-based pictures "The Abyss" and "Titanic" under his belt, "Sanctum" plays like an "avatar" James Cameron Film that you wonder how much creative imput he actually had on the project.

Loosely based on true events that screenwriter Andrew Wight endured, he and co-writer John Garvin don't have beginner's luck. 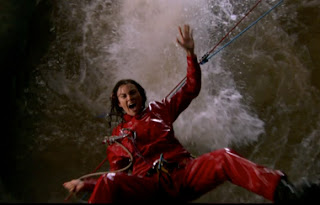 There should be suspense in who will live and who will die, but everybody is a watery, cardboard type and everybody's life line is telegraphed. So the real question is, who gives a damn?

To make matters worse, the performances are either wooden or campy, and the Irwin Allen disaster-movie template dialogue is so laughably clunky ("She's strong like bull, smart like tractor") and clichéd ("Life is not a dress rehearsal. You have to seize the day!"). The script is barely workmanlike, but it's the cave and underwater photography that's the most impressive.

Australian director Alister Grierson and cinematographer Jules O'Loughlin combine authentic location shooting, soundstage work, and digital effects, but neither of them always know where to put their camera to earn a thrill. Just 30 minutes into the film, "Sanctum" peaks early with a scene that gets the blood pumping: it's intense and claustrophobic, while the rest of the film is basically just a dim body-count slasher flick.

The perilous dangers these people face aren't from monsters (see 2005's harrowing "The Descent"), but Mother Nature and human errors. Interest really dwindles as the picture turns one of its characters into a broadly played villain.

As an I-MAX experience, "Sanctum" will take your breath away, but as a movie with sound and talking characters, it doesn't shut up enough.