"The Help" helped by emotional truth of wonderful cast 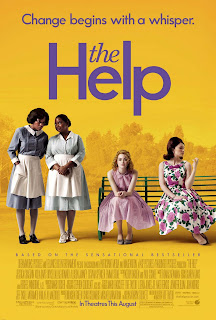 Racism and discrimination have come a long way. Sure it still exists in spurts, but luckily there's been a maturation since segregation. Now blacks and whites can coexist. Kathryn Stockett's 2009 novel—about the colored help being given a voice by a lone white girl—being adapted to the screen held trepidation for being sugar-coated into a black-and-white (no pun intended) weeper. Color this critic surprised (sorry, pun intended), "The Help" is still a Hollywood crowd-pleaser, but so emotionally enriching and wonderfully satisfying, and that cast! 1963, Jackson, Mississippi was no place for an African American, but if Tracy Turnblad can make a change in Baltimore, so can Eugenia "Skeeter" Phelan (Emma Stone, you know her and you love her). Wise beyond her years and having a lot to say, which is rare for a woman in Mississippi, Skeeter is the odd girl out for being such a free-thinker. An aspiring writer just out of college, she returns to her home town of Jackson and has bigger fish to fry than just finding a husband. Succeeding her day of finding work at the Jackson Journal newspaper, Skeeter attends bridge with her circle of old friends, but it's there and then that she becomes appalled by the treatment of the black maids, primarily Aibileen Clark (Viola Davis).

Given the duty of writing an article on cleaning advice, that which she can't really give, Skeeter asks to get notes from Aibileen. From there, she gets the idea of interviewing the maids of Jackson and writing a book from the perspectives of the help. A New York book editor (Mary Steenburgen, seen only on the receiving end of the phone) wants at least a dozen interviews and quick "before this whole Civil Rights thing blows over." Giving these colored women a voice in a scandalous tell-all best-seller will be a society changer but cause up quite the risky stir. "The Help" turns out to be Aibileen's story, as well as her sassy, outspoken best friend, Minny Jackson (Octavia Spencer). Aibileen has raised 17 white children, better than the real mothers, but she can't even use the same commode in the house. Hilly Holbrook (Bryce Dallas Howard), a bigoted socialite who believes whites will contact diseases just by sharing toilet seats with blacks, fires Minny after years of service.

The film itself might be the sunniest drama about racial prejudice, but it has an equal weightiness and levity without being melodramatic, preachy, or sentimental. Every woman gets her chance to breathe and make her time on screen count, and none of them are caricatures or stereotypes. Although Stone's Skeeter gives the colored help a voice, Viola Davis and Octavia Spencer give the film its powerful voice. The brilliant Davis brought down the house before in "Doubt," and after her turn as Aibileen, she can do no wrong. Never before has Spencer been given a multi-dimensional role, until now, and she is a sublime force to be reckoned with as Minny, a proud black woman. Stone, who keeps popping up weekly on screen, is reliably delightful. As Skeeter, she's plucky and wise without giving us a didactic heroine. Kept in the shadows by her ailing mother (Allison Janney) as to why the family maid (and nurturing mother figure) Constantine was casually let go, Skeeter (through Stone) makes us feel how much Constantine meant to her. Jessica Chastain is so vibrant and wonderfully poignant as the dippy, flighty, Monroe-esque Celia, Minny's latest employer. Howard is nastily good as Hilly; even if as far as the characters are concerned, Hilly is the most cartoonish, insomuch that she's the villain of the piece. She does get her just desserts in the form of a literal dessert (one of the film's offerings of humor). Finally, Sissy Spacek hilariously gets in the last word every time as Hilly's dotty mother.

Actor Tate Taylor, writing and directing his feature debut, sets a lot in motion but his script never feels overstuffed. His direction doesn't impress in terms of creative style, but Taylor knows how to tell a story. "The Help" is glossy in dealing with some of its thorny racial issues, but hey, this isn't a documentary interested in investigating the psychological roots of African Americans. It's a fable. And the film could've exised a few purposeless threads (i.e. the inclusion of a boyfriend for Skeeter), however, the film has an inspirational core and the actors, especially Davis and Spencer, take care of the story's hard truths. When the film gets to its tearjerking moments, they are not only applause-worthy but well-earned. Let it be known that "The Help" boasts the most remarkable ensemble of any year and some powerhouse, award-worthy performances. And not only does the film satisfy but it rings true.