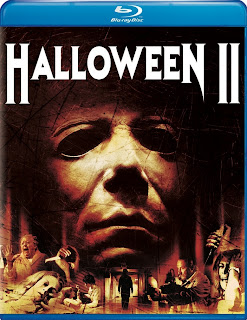 This solid, bloody sequel picks up immediately where its predecessor left off, continuing with the unstoppable Boogeyman stalking survivor Laurie Strode (Jamie Lee Curtis) on Halloween night. Dr. Sam Loomis (Donald Pleasence) shot Michael Myers six times, but he knows and we know that he's not finished yet.

Much of the film takes place inside the Haddonfield Hospital, so Michael can kill off nurses, security guards, ambulance drivers, and more sex-crazy teens. More watchable than other sequels, "Halloween II" may feel like a slasher-pic retread but at least it completes the story. Directed by Rick Rosenthal in his feature debut, the film has a clean style in its building of suspense, creeping around the hospital, and planting of shocks, even if the pacing often plods once we get to the hospital.

"A Night of the Living Dead" TV spot is a fun touch. And written by John Carpenter and Debra Hill again, it nicely ties up the relationship between Laurie and Michael: she is actually the other Myers sister. (Said twist also puts more emphasis on Laurie's singing “Just the Two of Us” in the original.) Some logic inconsistencies glare here and there too, like why aren't the cops watching over whimpering, shattered Laurie?

Though done with less restraint than Carpenter's classic—higher body count, more explicit murders, and some gratuitous female nudity—"Halloween II" is better than the afterthought it's been treated as. 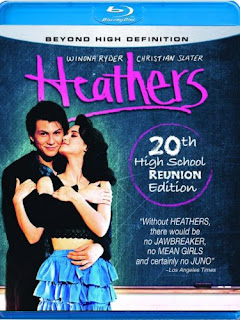 Comedy doesn't get any darker than it does here in "Heathers," a subversive, cynical, viciously funny jet-black comedy and satire that mocks teen angst and high school politics without being overly pretentious or heavy-handed.

Winona Ryder plays Veronica, a high school popular wannabe, who gets tired of hanging with her snotty clique of megabitches (or as Veronica calls them in her journal entries, “a bunch of swatch dogs and Diet Coke heads”), all named Heather. She later agrees with her new hellion boyfriend, J.D. (Christian Slater), to give the head bitch a reality check that turns into an accidental kill. Then teen suicide becomes the new fad since Heather “did” it.

Lick it up, baby, lick...it...up, "Heathers" is an interesting original that's been imitated over the years; check this one out. How very.