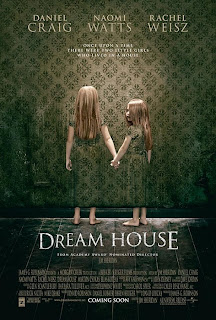 It is nary a good sign when a studio takes control over a filmmaker's creative vision. Such is the case with "Dream House," whose director, the much-acclaimed Jim Sheridan, reportedly had the film taken from him by Morgan Creek Productions to make post-production cuts and tweaks. As a result, Sheridan and his cast of name actors refused to make press rounds for it, and who could blame them? Even the boneheaded marketing behind "Dream House" gives away the major plot twist in the tell-all trailer. As it turns out, that's the least of the film's problems.

Quitting his job at a Manhattan publishing firm, Will Atenton (Daniel Craig) wants more time to write his book and spend it with his wife, Libby (Rachel Weisz), and two adorable little girls, Trish (Taylor Geare) and Dee Dee (Claire Geare). The family has just recently bought a New England house that aside from some renovations seems too good to be true. Then, as usual in all movie "dream houses," scary stuff starts happening. Dee Dee sees the face of a man outside the window. A group of teenage sadists sneak into the Atenton's basement, right underneath their noses, to hold a séance to celebrate the anniversary of when the former father of the house murdered his wife and two children. Ann (Naomi Watts), the divorced neighbor across the street, harbors secrets about the previous owners. Will digs up more dirt on the past of his house: the father, Peter Ward, was the suspect for comitting the murders but was never convicted and has just been released from a local psychiatric ward. So is this "Peter Ward" stalking the new residents or is there more to the story?

You should be able to answer that if you have seen the publicity. Then again if you live under a rock, "Dream House" sets itself up as an engaging things-are-not-what-they-seem mystery. Caleb Deschanel's cinematography adds a wintry atmosphere to the first half. Then the film divulges a big plot twist at the midpoint and could have been a haunting psychological drama about identity and grief. But it feels like someone thought "Dream House" painted itself into a corner and had nowhere else to go, so they hijacked David Loucka's screenplay and brought on a committee of writers to tamper with it. Every character turns out to be a plot device, especially those whom we scarcely see until the resolution. Craig actually finds interesting, brooding shades in his performance as Will, especially when the other shoe drops, but to say more would be spoiler-ish. Weisz is convincing as loving wife and mother Libby, but her odd moment with Craig, at a crucial climactic point, suggests either fear, a desire to make out, a lack of motivation in Loucka's script, or little direction from Sheridan. Watts is given the least to do as Ann, besides withholding answers from Will's questions. Seriously, when he asks anything about his house, Ann just stands there blankly and (a) shuts the front door or (b) walks away.

By the time the obvious, incongruous climax rolls around and the line, "Get the chloroform," is uttered, you'll put your hands up in surrender. The final act overexplains and underexplains itself with sloppy, convoluted writing, parallels to Demi Moore and Patrick Swayze's from-the-dead relationship in "Ghost," and a cornball finale. Marketed as a haunted-house thriller, "Dream House" is not so. With a promising blueprint by a "master storytelling" architect, it's a Lifetime-y misfire of ramshackle construction.