Two college kids, brother Darry (Justin Long) and sister Trish (Gina Phillips), are driving home together on a long, vacant stretch of country road when they are nearly plowed off the road by a decrepit truck. Miles later, they spot an old church and the mystery driver dumping something down a sewer pipe and make the serious mistake to turn around to investigate. So far, so good. Writer-director Victor Salva goes back to the old-fashioned bones of Hitchcock in just the first hour, crafting this creepy, sometimes scary, often gory horror film with an ominous atmosphere and great tension, and not showing the mysterious being right away like how Spielberg masterfully handled the great white shark in "Jaws." Then "Jeepers Creepers" gets sillier as a heebie-jeebies monster movie, giving us doubt that the trench-coat-wearing maniac may not be human. Who or what the killer is comes as a surprise, but really?

The two mainly unknown performers, Long and Phillips, make for a natural brother-and-sister pair, with their conversation and childish bickering setting up their believable love-hate relationship in the film's opening 10 minutes. Salva also leavens the tension and shock scares with a fun, self-referential sense of humor (as when Trish says, “You know the part in scary movies when somebody does something really stupid and everybody hates them for it? This is it.”), and puts the film's title, borrowed from a 1930s Louis Armstrong tune “Jeepers Creepers,” to effective use. In one subtly chilling scene, with the song blaring in the kids' car, we see the killer on top of the police car behind Darry and Trish.

The ironic conclusion is refreshingly bleak with an unforgettable final image, but it's not very satisfying in a traditional sense. Either way, "Jeepers Creepers" is one of the better horror treats to come down the pike in months. 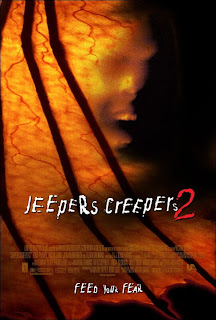 Jeepers Creepers, where'd they get that sequel? Lazily placing a number 2 after the original title, writer-director Victor Salva retreads his rubbery monster material. Every 23rd spring for 23 days, a winged, flesh-devouring fiend named The Creeper (Jonathan Breck), like a bat out of hell, emerges from hibernation in order to feed and regenerate itself. What a perfect main course when a bus breaks down on the legendary East 9 Highway, carrying an unwary high school basketball team, cheerleaders, and coaches! Meanwhile, farming father Ray Wise seeks out The Creeper for snatching his son a few days earlier.

The superfluous "Jeepers Creepers 2" works up tension in the early-going during a cornfield set piece and has a handful of skittish moments inside the bus, but ends ups being very rote. Two years ago, the Creeper was a mysterious monster that drove his creepy “B EATING U” truck, but now does a lot of flying and swooping and he's just as unstoppable as Freddy, Jason, or Chucky.

While its predecessor actually had atmosphere and two interesting characters, "2" only has a smattering of the former and none of the latter. The characters are annoying stereotypes and as interchangeable as the teenage sex-machines in any "Friday the 13th" movie that Salva should've just named them “Asshole Jock # 1,” etc. and be done with it. (Oddly enough, the homophobic jocks walk around shirtless and sunbathe atop the bus's roof. Homoerotic subtext anyone?)

Alas, the plotting is too routine and fixes up a senselessly contrived plot point about meek and mild cheerleader Minxie (Nicki Lynn Aycox) starting to have psychic visions of the first film's victim (Justin Long), laughably all without reason. Jeepers, there's even a setup for a third and we probably won't have to wait 23 years.