On DVD/Blu-ray: Lame "Green Lantern" has charismatic Reynolds but little else 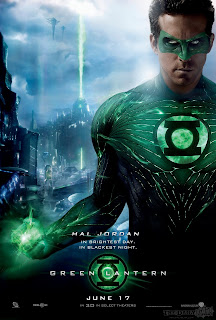 A big-screen version of the DC Comics superhero, "Green Lantern," has been in development since 1997, when Kevin Smith first had dibs, but now after fourteen years, here we are. Another month, another superhero tentpole, "Green Lantern" is shiny, shallow, and silly, not getting off to the most enticing foot. As the boringly overblown exposition goes, an ancient race of aliens known as the Guardians have divided the universe into 3,600 sectors, one of which is the planet Oa where an elite group of protectors called the Green Lantern Corps. resides. Each Guardian has a ring that contains the most powerful force, the power of will, but a cloud monster known as the Parallax (with the power of fear) is killing those known as Green Lanterns. Did ya catch all that?

Hal Jordan (Ryan Reynolds), a cocky, reckless test fighter pilot, suffers from—get this—D.I. (Daddy Issues, not Diabetes Insipidus). Taking after his late pilot father, Hal tests planes for an aeronautics company owned by the father of his fellow pilot and former lover, Carol Ferris (Blake Lively). One night, he's transported by emerald energy to the crash site of a purple-faced alien's spacecraft. Chosen by the dying alien's powerful ring, Hal is proclaimed a Green Lantern and later whisked to Oa to be trained. The ring gives Hal the cool power to conjure up anything out of thin air, such as a race track to save a helicoptor from crashing or crank out a chainsaw in a sword fight. Meanwhile, nerdy professor Hector Hammond (Peter Sarsgaard), whose senator father (Tim Robbins) sets him up to investigate the corprse of the purple-faced alien that Hal found. A piece of Parallax inside the corpse touches Hector, giving him telepathic and telekinetic powers as well as a giant, mutated forehead, and costs his sanity.

Given the mythology and screenplay, Hal's Green Lantern is a third-stringer at best. Director Martin Campbell ("Edge of Darkness") moves this hokey superhero stuff at a brisk clip, but the four-person script (written by Greg Berlanti, Michael Green, Marc Guggenheim, and Michael Goldenberg) is flimsy and cluttered, never using the green ring to its maximum potential. Early on, Hal's two brothers and his kid nephew are introduced, then abruptly never seen or heard from again. The history to why Hector is so jealous of Hal is reduced to an undernourished cliché. Also, the stakes couldn't be more lacking, as defeating Parallax seems like nothing much and there's not really a climax. What's more, no superhero movie is as good as its villain, and Parallax just resembles a gigantic blob of feces.

Reynolds has the right stuff to headline a superhero movie, charisma and a cut physique, but he's given no developed character here. Given no other defining trait than being arrogant, Hal is the kind of hotshot that lacks responsibility and quits a task before it's finished. Peter Parker learned as Spider-Man that with great power comes great responsibility, but Hal doesn't really evolve. Lively is merely window dressing as Carol, the Lois Lane-type damsel-in-distress. But for once, the girl can actually tell who it really is behind the green sleep mask and unitard ("You don't think I would recognize you because I can't see your cheekbones?"). Sarsgaard is the most interesting "thing" here as Hector, going to the dark side and donning hideous Elephant Man make-up when he grows a big alien goose egg on his forehead. Unfortunately, Mark Strong is mostly wasted in purple make-up as the Corps leader Sinestro, as are Michael Clarke Duncan and Geoffrey Rush's voices, respectively playing the porcupine-looking trainer Kilowog and the fish-like Tomar-Re.

Some of "Green Lantern" is cheesy and fun on the most rudimentary, "Flash Gordon"-type level, but mostly just cheesy. Warner Bros. can spend all the millions of green they want on the special effects, but the CGI-heavy action scenes look so processed and phony. Coming after the first chunk of end credits is a set-up for a sequel, but it's a nonsensical tease. A mediocre but not-terrible superhero entry, "Green Lantern" is more distraction than entertainment. Hopefully the tie-in roller coaster and the video game are more thrilling.