Uneven "Twilight Zone: The Movie" has its fun moments 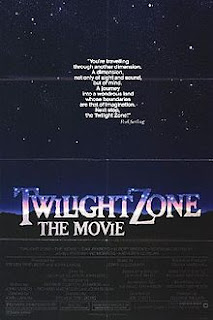 Four in-their-moment directors try their hand at affectionately reworking Rod Serling's '60s anthology TV series in "The Twilight Zone: The Movie" where things are not what they seem. Teasing us with an entertaining, self-aware prologue written and directed by John Landis, Dan Aykroyd and Albert Brooks star as two travelers discussing TV shows on the road.

From then on, the quartet of stories have their ups and downs like any anthology usually does. First up is the only original segment “Time Out,” Landis writing and taking the wheel once more, about a bigot (Victor Morrow) being transported back in time to Nazi Germany, at a Klu Klux Klan lynching, and in the Vietnam jungles to get a taste of his own medicine firsthand. It's a draggy, predictable comeuppance tale and alas literally, this happened to be Morrow's last film due to his death in a helicopter accident on set.

Next stop, Steven Spielberg's “Kick the Can.” Scatman Crothers plays a mystical, childlike old man who has recently moved to a retirement home and uplifts the eldery residents with youthful magic. Although Spielberg created the beloved '80s anthology series “Amazing Stories,” his contribution is the weakest, with more whimsy and schmaltz than fantasy or horror, similar to “Peter Pan” and Ron Howard's "Cocoon" (1985).

But then comes a quick comeback with the third story “It's a Good Life,” Joe Dante at the helm (written by Richard Matheson). A traveling schoolteacher (Kathleen Quinlan) strays off the beaten path and gets stuck in a real “twilight zone,” that controlled by a seemingly harmless little boy who loves video games and cartoons so much that he controls and traps a family in his cartoon-monster land. It has a "Looney Tunes"-like sensibility and a weird, demented spirit that showcases what Dante would create a year later in "Gremlins."

And the best really is saved for last: "Mad Max" director George Miller's remake of the TV episode “Nightmare at 20,000 Feet” has the most kick. John Lithgow is delightfully over-the-top, in the William Shatner role, as an overexcited passenger of a plane who notices a slimy gremlin on the wing of the plane, tearing up the engine, and spirals into a crazy-nervous panic. Expectedly more kinetic and intense than the original episode, it's an effectively nightmarish and claustrophobic capper.

The wraparound epilogue, also helmed by Miller, is a hoot and has Aykroyd giving us the same jolt as the opening. Burgess Meredith (who starred in a few of the original episodes) does the classic voice-over here with Serling's narration at the end, and Jerry Goldsmith (who was one of the many composers for the series) composes the unforgettably eerie “nee-nee-nee” theme again. "Twilight Zone: The Movie" is ultimately propped up by the filmmakers' imagination and skill, despite its uneven sections, and plays as an enjoyable-enough time around the campfire.