DVD/Blu-ray Review of "The Nutcracker: The Untold Story" 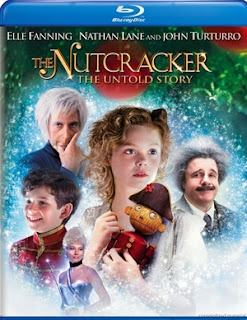 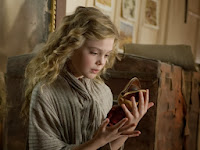 Can you say "freely adapted" much? Misconceived as a wrongheaded disaster because of its theatrical 3D post-conversion, "The Nutcracker: The Untold Story" is really just a wonky, lavishly made re-imagining of E.T.A. Hoffmann's classic tale as if made by Terry Gilliam and Tim Burton. Vienna, 1920s: Mary (Elle Fanning) awaits her Uncle Albert (Nathan Lane), as in Albert Einstein, to take care of her and bratty, destructive brother Max (Aaron Michael Drozin) on Christmas while their parents (Richard E. Grant, Yulia Visotskaya) go off to a party. Albert gives Clara, er, Mary a wooden Pinocchio-looking nutcracker, and after the young girl falls asleep, the toy pops to life. He's NC (voiced by Shirley Henderson but acted by Charlie Rowe), a cursed prince, and wants Mary's help to stop the Hitler-like Rat King (John Turturro), his Rat Queen mother (Frances de la Tour), and their Nazified rodents from burning toys and rat-ifying the world.

Co-writer/director Andrei Konchalovsky forgets the ballet but uses some of Piotr Tchaikovky's beloved music. This story probably didn't need all the steampunk Holocaust motifs or literal-minded lyrics to the already-perfect music (especially Lane's Albert singing "It's All Relative" about the Theory of Relativity to the melodic strains of "The Dance of the Sugar Plum Fairy"). And why not throw in an ape man, effeminate clown, and a Jamaican drummer named Sticks as NC's Cowardly Lion/Tin Man/Scarecrow sidekicks? Elle Fanning glows throughout with her God-given poise, but an eccentric Nathan Lane inanely talks directly to the camera and a flamboyant John Turturro looks more like a resident of Dr. Seuss's Whoville wearing an Andy Warhol wig than a rat. More head-scatching than magical, but something of a strange delight that often harkens back to Disney's darker days.