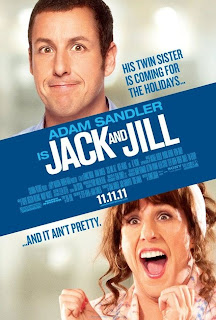 It takes a bad movie, like "Jack and Jill," to put into perspective just how precious a harmlessly mediocre movie, like "Just Go with It," really is, especially when your name is Adam Sandler. His production company, Happy Madison, routinely churns out flatulence-infested crap, but "Jack and Jill" is the final insult. A cynical, insultingly stupid, and odiously unfunny farce, it's definite proof that these man-children haven't learned any new jokes since they were eight years old. From his blooming charm in "The Wedding Singer" and the now-and-again comedic pleasure ("Big Daddy" and "50 First Dates"), has it really come to Sandler playing male and female fraternal twins? Not a sketch—a 90-minute movie! What's really pathetic is that a lot of American audiences are going to lap it up like a greasy cheeseburger and fries.

Working as a commercial director in Los Angeles, Jack Sadelstein (Adam Sandler) dreads the visit of his Bronx-born twin sister, Jill (Sandler again in drag), for Thanksgiving to stay with his very understanding wife (a thankless, sickly-sweet Katie Holmes) and two children, one of them an adopted Indian-American. Picked up by her brother from the airport at 4:30 a.m., Jill is a single, whiny, and loud pain in the rump. Jack grits his teeth as Jill extends her visit through Chanukah and then on. During her visit, she desperately tries looking for a man on dating websites but with no such luck to get Jill out of Jack's personal bubble. That is until Jack is assigned to get actor Al Pacino (played not by Sandler but Al Pacino himself!) on board to appear in a Dunkin' Donuts commercial to advertise a new coffee drink called a "Dunkaccino." When Jack takes Jill to a Lakers' game, Jack approaches an incognito Pacino, who immediately becomes head-over-heels smitten with Jill.

The one-joke idea of Sandler playing both Jack and Jill could've been endearing or even potentially amusing, but no, it's so broadly played and strained. Rather a premise than a story, comic bits start and stop, and are often held on for so long that they just die. Mercifully, "Jack and Jill" runs only 93 minutes, but feels much, much longer and, like Jill, overstays its welcome. Jill is such a grotesquely shrill and obnoxious caricature that it's hard to tell whether Sandler's devoted director Dennis Dugan, the writers, and Sandler himself wanted us to feel bad for the schlep or laugh and point.

Instead of making her charming, she's completely clueless about everything, including personal hygiene and public decency. Jill leaves a stain of body sweat on her bed sheet, drops "chimichanga bombs" and "chocolate squirties" in the toilet after eating too much Mexican food, and loudly answers her cell phone in a movie theater as if she's in the privacy of her own home. There's even a running joke that doesn't really work the first time but becomes a threepeat anyway: Jill brings up a movie, "that movie with Julia Roberts, where she's a hooker," and another character will answer her with the correct movie ("Pretty Woman" in this case) and she'll disagree. Whatever the case may be, the movie blows wind and then apologizes for it later with hypocritical, gooey sentimentality, laying it on thick that family is muy importante! (There was actually a woman in the screening holding back her tears.)

Dugan, being the film auteur that he is, shamelessly packs the movie with cheap, juvenile fart jokes, ethnic and religious stereotypes, more fart jokes, and egregious product placement galore. Who even has this much money to pay all the stars that give mostly useless cameos? Oh look, there's Regis Philbin! Johnny Depp in a Justin Bieber T-shirt! Drew Carey hosting "The Price Is Right!" And John McEnroe, Christie Brinkley, Billy Blanks, and Jared Fogel (you know, the now-slim Subway guy)! Even Sandler's chums Allen Covert, Peter Dante, Nick Swardson, Dana Carvey, Norm MacDonald, and Gary Valentine do their buddy a favor. David Spade's later cameo, as a big-breasted blonde that dated Jack in high school, is more convincing than Sandler as Jill.

Holmes could've been replaced by a cardboard cut-out, and no one would've noticed, as she's given nothing to do besides glare at Sandler and force him to make peace with...Sandler. At least she got a paid vacation out of it. At the center of this turkey, Pacino has a slumming good time. In on the joke, he rants and raves on stage playing Richard III when a cell phone goes ringing in the audience, gets one funny line involving his one Oscar, and later, gamely tries to seduce Sandler. But in the end, Pacino looks rightly embarrassed. Watching uncut footage of the "Dunkaccino" commercial where Pacino raps and busts a move, he looks petrified and says, "This. Can. Never. Be. Seen. Burn it."

Any comedy of Sandler's that sarcastically comments on Rob Schneider's entitlement as a would-be movie star deserves a shout-out, but that's where the sense of wit ends. "Jack and Jill" doesn't even make it up the hill, but instead tumbles and falls flat on its face, cracking all of its teeth.