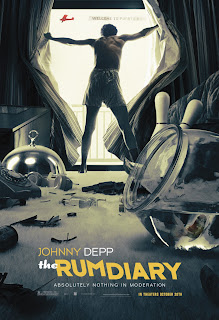 "The Rum Diary" isn't Johnny Depp's first foray into the gonzo world of revered journalist Hunter S. Thompson. In 1998's hallucinogenic, Terry Gilliam-directed "Fear and Loathing in Las Vegas," a quasi-autobiographical adaptation of his 1971 roman à clef, he scarily portrayed Thompson's drug-crazed alter ego Raoul Duke. Prepping for the dementedly drugged-out role, Mr. Depp had become close friends with Thompson and discovered the shelved manuscript, urging him to publish "The Rum Diary." Clearly, this is a rum-soaked labor of love in memory of Thompson, who committed suicide in 2005. Depp even handpicked Bruce Robinson (who hasn't made a film since 1992's "Jennifer Eight") to adapt the script and direct "The Rum Diary."

Set a decade earlier in 1960 before the acid-mescaline-ether trips, this pre-gonzo companion piece takes place on the tropical shores of San Juan, Puerto Rico. Another fictionalized alter ego of Thompson's, Paul Kemp (Depp) is a New York novelist-cum-journalist fueled more on booze than narcotics. When we first meet him, he wakes up hung-over in an oceanside hotel, the Xanadu, and goes late to an interview with a newspaper editor-in-chief, Edward J. Lotterman (Richard Jenkins, wearing a shifty toupee), at the San Juan Star that's going under. Masking his bloodshot eyes behind aviator shades, Kemp is just another hard drinker on Lotterman's hands, but snags a job writing horoscopes and cynical local pieces about casinos and bowling alleys. Filthy rich PR consultant Sanderson (a perfectly slick and oily Aaron Eckhart) seeks out Kemp and hands him his business card, hoping the puff writer can give him positive press for a new land-developing deal. When not in his own alcoholic haze, Kemp is further intoxicated by a gorgeous fatale named Chenault (Amber Heard), who turns out to already be Sanderson's gal. Once Kemp loses his Star-paid hotel room from drinking a whole mini bar of liquor miniatures, he moves in with photographer Bob Sala (Michael Rispoli) and continues to do a lot more drinking than reporting.

As Paul Kemp, Depp is still perpetually under the influence but more subdued, charismatic, and with-it than the uninhibited Raoul Duke. One minor nitpick with the casting of Depp as an earlier Thompson surrogate: the actor, himself, is closing in on 50, while Kemp is supposed to be in his 20s. The rest of the cast gets enough character business, even if not all of them are given deep, deep characterizations. The brightest light of the outrageous characters is Sala, a stand-in for Benicio del Toro's Dr. Gonzo, played with sidekicky verve by Rispoli. As blonde bombshell Chenault, Heard is ravishing with her tan skin and ruby red lips, but she's never given enough layers on the page to overcome a merely decorative role. As brain-fried, Nazi propaganda-obsessed ex-reporter Moburg, Giovanni Ribisi is over-the-top, but he's a hoot and really goes to some hilariously lunatic places that we've never seen from him before.

Gilliam's "Fear and Loathing in Las Vegas" was less of a wild bender than just a painfully outrageous, barely watchable mess, which by default makes "The Rum Diary" easier to take. Even so, it's a colorful, lark-ish diversion, a meandering shaggy-dog story in the truest sense. Robinson provides some punch from Thompson's prose and evokes a steamy atmosphere out of the Puerto Rican locale with the help, of course, from Dariusz Wolski's cinematography. The city of San Juan is shot as half lush paradise and half poor decay.


"The Rum Diary" ambles along and may not walk in a straight line, much like Kemp and the kind of characters he encounters. Instead of cohering as a conventional, structured story, it has a loose, episodic vibe with amusing vignettes: Kemp and Sala take in a cockfight, are chased out of a local bar, get into deep with the police and the court system, taste-test 360 proof rum, and visit a fire-breathing witch doctor. Some of the madcap misadventures are more diverting than others, Kemp's dry-humping ride in Sala's VW bug taking the cake. There's one weird, hallucinatory sequence, when Kemp and Sala take an unnamed eye-drop drug from Moburg that sends them on a wild trip. As Sala's "tongue feels like a towel" and sloppily slithers toward Kemp, the image is more gonzo, surreal Thompson than the rest. This breezy vacation might not blaze at the frenetic, trippy pace of "Fear and Loathing" and is just as aimless, but it's arguably more fun while it lasts. No hangover after this one.