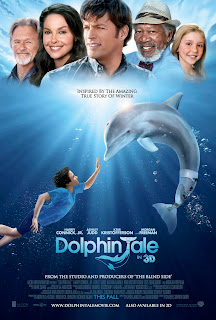 "Free Willy." "Andre." "Black Beauty." "Lassie." "Flipper." "My Dog Skip." "Because of Winn-Dixie." Well, you get the idea. The world is not exactly lacking family films about a kid and an animal. Whether one will enjoy "Dolphin Tale" will probably be determined within 40 seconds of the opening sequence, where a pod of darling CG dolphins dive across the ocean surface and swim through rings made from their blow holes. But at the deep end of that screensaver, there's actually an inspiring true story about a marine animal amputee. In fact, the film feels less sugar-coated than "Soul Surfer," a film out earlier this year that "corned up" the otherwise remarkable true story of surfer Bethany Hamilton losing her arm in a shark attack and combating the odds.

Five years since he and his mom (Ashley Judd) were abandoned by his dad, 11-year-old Sawyer Nelson (Nathan Gamble) keeps to himself most of the time. While riding his bike to summer school on the same morning that his cousin Kyle (Austin Stowell) leaves to serve in the military, Sawyer helps rescue a dolphin ensnared in a crab trap along the Florida seashore. Then later, he visits the poor thing, now named Winter, in an aquarium at the Clearwater Marine Rescue Hospital, where Dr. Clay Haskett (Harry Connick Jr.) and his daughter, Hazel (Cozi Zuehlsdorff), nurse her back to health. The more he visits Winter, the more he cares about the animal; she tweets like Tweety bird when Sawyer is around, and he comes out of his alienated shell and finally seems excited about something. Winter's tail is severely damaged, so she must have it amputated, but if Winter doesn't shape up and wear a prosthetic tail, she will die.

When a film is marketed as being "inspired by a true story," that just means, in this case, that there really was a dolphin named Winter with an injured tail and trained to swim with a prosthetic one. And the rest is fudged as formulaic fiction. For superfluous conflict, Karen Janszen and Noam Dromi's screenplay employ a damaging hurricane, cousin Kyle's military disability (mirroring Winter's), the broke marine hospital having to close down, and a land developer that wants to take it over. As it stands, "Dolphin Tale" has its corny trappings and runs too long, and why does everyone always come together as a do-good commune? But director Charles Martin Smith (who made the 1997 Golden Retriever/basketball movie "Air Bud," not inspired by a true story) makes sure the story doesn't dive into schmaltz and makes it easier to digest.

With a built-up filmography already, typically blonde-haired Gamble (looking like a younger Josh Hutcherson) comes into his own with a sensitivity and reserved appeal as Sawyer. Newcomer Zuehlsdorff, gaining acting experience on stage, lands her first screen role as Hazel. The freckled young actress perhaps pushes on the live-wire chattiness a bit in the early going, but dials it down and shows a natural enthusiasm and likability. There's a nicely written scene where Sawyer and Hazel realize they both share the loss of a parent, but a slapsticky sequence involving them playing with a remote-control helicopter seems to arbitrarily exist for its optional 3D release. The adult cast doesn't get to explore that much depth, but Connick Jr. grounds the story as the marine biologist. Judd takes up the thankless mother role with a maternal warmth. Thankfully, no tacked-on romance develops between Hazel's widower father and Sawyer's single mother. Kris Kristofferson and Morgan Freeman are merely workmanlike in their respective parts as Clay's sage seafaring father and Kyle's prosthetic doctor who ends up fabricating an artificial tail for a different kind of mammal.

A movie called "Dolphin Tale" with a cute little boy, an injured porpoise, a silly pelican named Rufus, and Morgan Freeman might be considered sappy and manipulative in hopes of melting our hearts into jello. And you bet your dolphin tail there's a chirpy montage cued to the doo-wop tune "Sh-Boom" with Sawyer, Hazel, and Winter relaxing on inflatable rafts! Or that obligatory scene where everyone happens to be tuning in to the news at the same exact time to hear Winter's heartfelt story! Then again, one can't help but be won over by its sweet, earnest heart and good intentions. Try not to get choked up during the end credits' home-video footage showing Winter as an inspiration to human amputees. 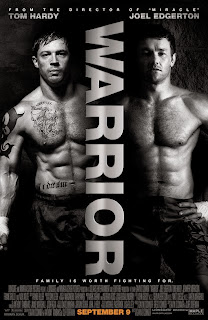 "Warrior" is one of those sports movies that takes its clichés and formula conventions as seriously as a heart attack. It should also be noted that although it's still hot on the heels of 2010's gritty, emotionally resonant "The Fighter" and packs less of a punch, director/co-writer Gavin O'Connor's film offers up some emotional guts.

Returning home to his working-class neighborhood in Pittsburgh from the Iraq War, Marine Tommy Riordan (Tom Hardy) pays a surprise drunk visit to his estranged father, Paddy (Nick Nolte), a recovering alcoholic on the literal thousandth day of his sobriety. Though he adopted his late mother's maiden name and has been gone for fourteen years, the scornful Tommy forgives his own father's past mistakes, at least enough to seek Paddy's help in training for "Sparta," a mixed martial arts tournament. Meanwhile, his estranged brother, Brendan Conlon (Joel Edgerton), is a high school physics teacher in Philadelphia. He used to be an UFC fighter, until he married Tess (Jennifer Morrison) and had two daughters. Now, Brendan earns some cash on the side for local fights, while Tess thinks he's just moonlighting as a bouncer. After he's suspended from his teaching position for coming to work with a black eye from a fighting match held in a strip-club parking lot, Brendan becomes too financially strapped to afford their "upside down" mortgage. (They already owe huge medical bills from one of their daughters' operations.) If he doesn't act soon, the bank will take their home. Against the wishes of Tess, Brendan decides to train, sign up for Sparta, and heads to Atlantic City in hopes of winning the $5 million prize. Will the brothers face one another and finally make peace?

O'Connor shows his obvious craft for sports movies (2004's "Miracle") and family dynamics (1999's "Tumbleweeds"). His staging of the bouts in the fighting arena are so realistically brutal that we feel every punch and chokehold. The working-class milieus are shot with a hand-held, rough-around-the-edges sensibility that the Pittsburgh and Philadelphia neighborhoods feel gritty and real. Although a good chunk of the film centers on the MMA tournament (complete with some split-screen training montages), it's really about a broken family that we hope mend their rift. Even the climactic mano-e-mano between brothers exudes a rousing tension, as pent-up anger is taken out by each punch.

Hardy is intense and volcanic as Tommy, and Edgerton is passionate but less showy as Brendan. And obviously, the English and Australian actors have both been to the gym. Nolte looks suitably puffy and acts the hell out of Paddy. Only until Tommy forces Paddy into an alcoholic relapse do we see why his sons estranged themselves from him. A would-be sappy moment comes when Paddy waits outside Brendan's house for his son come home. He wants to finally meet his two granddaughters, but no pushing of Paddy will change Brendan's mind. We can feel Paddy ready to implode from all of his guilt and regret. Morrison is also good as Tess, but her part is such a flyweight that she has three uninteresting modes: devoted wife, a nag, and finally, a ringside cheerleader!

By the end, the brothers' respective reasons for fighting in the ring become mostly a means to an end. Tommy is a selfish, embittered jerk, but wants to give the money to the widow of his war pal. If Brendan takes home the money, then he and his family will overcome their financial strife and be able to keep the house. There's no real payoff for either of these plot points, but in retrospect, only a more conventional film would see these issues through to happy endings. The character drama could've been fleshed out even more, but "Warrior" is a solidly made, forcefully acted crowd-pleaser. It's emotionally manipulative, but effectively so, that you're bound to feel something.