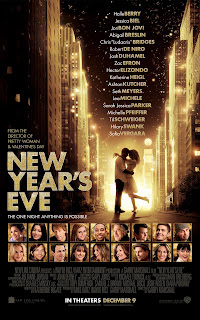 Schmaltz director Garry Marshall's New Year's resolution must have been to repeat the box-office success of he and screenwriter Katherine Fugate's fluffy "Valentine's Day" with the equally fluffy "New Year's Eve," another Facebook page of a movie. Marshall recruits another gigantic who's who of famous faces (a list longer than a human centipede) and so many plot strands for another trivial special-occasion/holiday on a different coast in hopes of it all sticking. Raise your glasses to there being no "Earth Day" in pre-production. "New Year's Eve" might have a star line-up of Hollywood marquee names to get gullible audiences into the theater, but it has very little to show for it. What this cheesy, generic Love, American Style/The Love Boat-style confection does not realize is that New Year's is mostly just an excuse to booze it up and bring in the New Year. This movie thinks it's so much more than that, a time of forgiveness, new beginnings, serendipitous love, and watching that big ball drop. Get real, movie.

It's December 31st, the biggest night of the year in New York City, and everyone is desperately preparing for the titular holiday. Claire (Hilary Swank), the VP of the Times Square Alliance, is stressing out over the evening festivities going down smoothly, especially when the ball breaks down midway. Will the night be a success? She's not the only one in a tizzy, as catering chef Laura (Katherine Heigl) prepares the food for a special holiday gala, but also has to face her ex, Daniel Jensen (Jon Bon Jovi), the rock star performing that night. Will they win each other back? One of the musician's back-up singers, Elise (Lea Michele), leaves her apartment for the same gig but gets trapped in her building's elevator with an unkempt neighbor, comic book illustrator Randy (Ashton Kutcher), who's a Scrooge around New Year's. Will opposites attract? Riding around the city is Randy's buddy, Paul (Zac Efron), a courier who helps mousy record-label secretary Ingrid (Michelle Pfeiffer) fulfil her resolutions in exchange for free passes to The Big Party. Lost yet? Just a few more "meanwhiles" and it's over. Rebellious 15-year-old Hailey (Abigail Breslin) wants to spend the night in Times Square with her friends and the boy she likes, but her single mother Kim (Sarah Jessica Parker), working as a seamstress, isn't too keen on the idea. Naturally, Hailey sneaks out, leaving Kim to go out and find her. Sam (Josh Duhamel) experiences car trouble and has to make it to the city that never sleeps before midnight to meet his mysterious dream girl. Also, at the hospital, an expectant couple (Seth Meyers and Jessica Biel) becomes determined to beat out another couple (Til Schweiger and Sarah Paulson) and win a $25,000 prize awarded to the first baby born in the new year. Finally, terminally ill patient Stan Harris (Robert De Niro) just wants to watch the ball drop before he croaks and Nurse Aimee (Halle Berry) has his empathy. Phew!

The time Marshall and Fugate spent on trying to connect the gridlock of plot threads and tricking the audience could've been spent on cleaning up the bare-minimum script. There's very little character here, just celebrity, but some of the thespians make the most of sappy material and turn in nice performances. Others just feel phoned-in. Swank is saddled with the least interesting thread. By the time the New Year's ball gets stuck and Claire has to deliver a reflection speech to the public and the press, it's so rich in corn that one can't help but roll their eyes. If the dawn of a new year really holds deeper meaning, then what's all the fuss about the ball dropping? Ludacris, as her good-luck-charm cop friend, literally just has to stand by her side for moral support rather than being home with his family. Heigl is playing a slightly less annoying variation of every other rom-com role she's attacked, but her rekindling romance with Bon Jovi is a pre-fab cliché. Kutcher and Michele share a sparkless, illogical romance, but at least the photogenic, dimpled "Glee" star gets to sing.

Pfeiffer garners the most sympathy as Ingrid, and the actress portraying dowdy brittleness is actually kind of charming. Even Efron exhibits some real charisma, as his Paul evolves into less of an obnoxious tool than he lets on at first. Their vignette has a sweetness, even if both characters barely rise above two dimensions. Also, De Niro and Berry turn what could've been completely manipulative and mawkish into something poignant, especially once their loved ones are revealed. Oscar nominee Breslin has always done bright work in the past, but her Hailey is such a petulant brat, yelling at her mom for being a helicopter parent since she won't get her way. Worse, the young actress is either badly lighted, done up with too much pasty makeup that makes her look like the victim of a bad nose job, or both. Self-deprecating stand-up comic Russell Peters and Sofía Vergara both show up as one of Laura's helpers and her new sous chef, mugging and spouting off wisecracks. Several other celebrities/actors (Ryan Seacrest, Matthew Broderick, John Lithgow, Carla Cugino, Alyssa Milano, Cherry Jones, Yeardley Smith, and Marshall's loyal friends Larry Miller and Hector Elizondo) pop up in cameo-sized parts that the "Oh, Look Who It Is!" game becomes distracting. Garry's sister Penny Marshall unexpectedly has the funniest line in five seconds' time.

As was the case with "Valentine's Day," the movie is spread so thin and so filled to the brim with characters' petty conflicts and goals vying for our attention that no room is left for actual drama worthy of our time. The only "rattling" suspense lies in Claire's serious business she must contend with after that pesky ball gets fixed and whom Sam will race to kiss before midnight hits. How they resolve/intertwine is pleasant enough, but screenwriter Fugate needs to learn how to pick and choose so we feel romantically swooned and not left wanting. Not only that, but the light moments are often flattened by Marshall's shticky direction and the clunkily written jokes. "Ladies, may the best va-jay-jay win" is the worst of the bad puns.

To be sure, there is some superficially diverting appeal in seeing a lot of name talent having a great time. If that's all you crave, especially before the weighty awards season, you will get what you expect from Marshall and his Hollywood squares. Charles Minsky's cinematography does capture the glitter and sparkle of ringing in the New Year on the Crossroads of the World. But with its guest list collecting generous paychecks at our expense, "New Year's Eve" has nearly the same value and amount of substance as flipping through an issue of Us Weekly. And when did Garry Marshall become the hack version of Robert Altman? It's disheartening when more joy and laughs will be had in the end credits' sequence and outtakes, cued to Pink's "Raise Your Glass." That real party looked more fun.