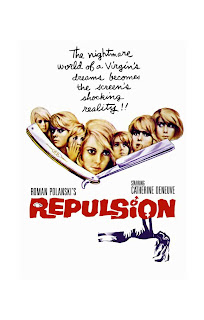 Three years before the auteur's creepily perfect "Rosemary's Baby," Roman Polanski's slow-burn descent into insanity quietly uncoils in "Repulsion," the writer-director's first English-language film. And it's no cheap horror film. Prior to becoming a star, Catherine Deneuve—a beautiful blonde zombie here—plays Carol, a lovely, virginal but disturbed young French woman living in London with her sister while working as a beautician. When Helen goes away on holiday with her adulterous boyfriend, the lonely, sexually repressed Carol sulks and starts to crack after she shuts herself in her apartment.

Building at a leisurely pace, reality and nightmare blend into the bizarre, horrific hallucinations that Carol endures, such as a rape, murder, cracks in the walls, and hands protruding from the walls. The fever dream of "Repulsion" ranks alongside the American shocker "Psycho" and French shocker "Diabolique." Strikingly shot in black-and-white, and Chico Hamilton's high-tempo jazz score is a humdinger for the excellently disorienting sound design of clocks ticking, flies buzzing, water dripping, bells clanging, and sporadic inaudible scenes. Chilling and disturbing, "Repulsion" puts you through a claustrophobic wringer of isolation and madness. 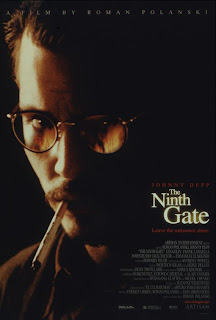 After taking a five-year hiatus, Roman Polanski is back with "The Ninth Gate," an atmospheric but ponderous Faustian tale. It's like a lackluster brew that never comes to a full boil.

A chameleon of his craft, Johnny Depp chain-smokes and acts as unscrupulous as Johnny Depp can playing sleazy mercenary antique-book dealer Dean Corso (great name). An expense-paid trip to Europe has him seeking the authenticity of a rare book by an academic collector (Frank Langella), who possesses one edition, hires him to find the other two long-lost volumes of The Nine Gates of the Kingdom of the Shadows written by Mr. Scratch, Lucifer, ah yes, the Devil himself. As death and bad karma chase him (as do shady thugs), Corso gets more than he bargains for in his search for the damn book. Throughout, he's watched over by a mysterious chick (Polanski's chick, Emmanuelle Seigner) who can fly and disappear in a second's time. She could be a witch in a pact with the Devil, like one of Langella's lectures entails, but Polanski never explains her character or her powers.

After a dizzying, entrancing opening credit sequence, Polanski uncoils this mumbo-jumbo at a slowly seductive, Gothic-European pace surrounded in ominous mystery, not unlike his "Rosemary's Baby," with bits of the director's sardonic wit. Interesting at the onset and silly thereon, "The Ninth Gate" is satanic nonsense that drags out its long investigation with a lot of strange, meaningless detours and predictable twists. May it be contributed to too many cooks in the kitchen—based on Arturo Perez-Reverte's novel “El Club Dumas” and the script credited to three writers, Polanski included—the film ultimately leads nowhere, besides a fade to white and then the credits. Some scenes share a striking resemblance to Polanski's own Frantic and Stanley Kubrick's "Eyes Wide Shut" at a chateau for the robe-clad occult.

Depp shows traces of tongue-in-cheekiness in his performance as Corso but he seems unengaged with the material. Lena Olin slinks around as the cat-scratching, crazy-bitch widow of an old late collector, and Langella froths at the mouth as Boris Balkan (another great name). Darius Khondji's good-looking cinematography and Wojciech Kilar's half-sinister, half-bumbling musical score are the only satisfying elements. Never have so many unanswered questions and unquestioned answers been so mysteriously muddled as they are in "The Ninth Gate." Polanski takes the easy way out, saying the Devil made him do it.