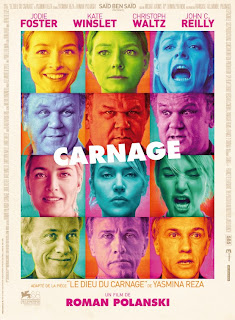 Yasmina Reza's Tony Award-winning play God of Carnage—about two sets of parents stirring up argument in an apartment—does not sound like it would translate well to film. Auteur director Roman Polanski takes it to the screen and mostly succeeds by the skin of his teeth from the participation of three Oscar winners and one Oscar nominee. "Carnage," a four-headed, real-time chamber piece and satire of bourgeois values and manners, is forcefully acted and scathingly written. But as a film, it's never as cinematic as it could be to warrant the film medium, and as a black comedy, it never quite reaches its potential boiling point. Perhaps that's the fault of the source material, but if it's up there on the screen, Polanski and his actors should be more capable of a satisfying feast than a slightly malnourished amuse-bouche.

Jodie Foster and John C. Reilly play the liberal Penelope and Michael Longstreet, a high-strung writer and a dim houseware supplier whose 11-year-old son was injured in a schoolyard brawl. They advise a cordial meeting in their Brooklyn apartment with the bully's conservative parents, Nancy and Alan Cowan (Kate Winslet and Christoph Waltz), an uptight investment broker and work-obsessed attorney. The Longstreets request an apology and hope to work things out, but after a mature discussion of child rearing, all civility is lost for both parties. Apple-pear cobbler is served, then eaten and puked on Penelope's coffee table, staining her priceless book of Oskar Kokoschka paintings. Alan keeps conducting business over his ringing phone. Over the course of one afternoon, as the Cowans keep trying to leave, both couples' self-righteous true colors emerge. Then once an 18-year-old single-malt Scotch is added to the mix, it will either put them all at ease or worsen the carnage.

Aside from bookending shots in Brooklyn Bridge Park where the fight breaks out and then the boys ironically make amends, writer-director Polanski keeps the action stringently hermetic and stagey in its theatrical roots. These characters are kept so rigidly contained within the walls of the Longstreets' apartment that when the Cowans repeatedly make attempts to go out the door, even making it to the elevator at one point, they fail. 1966's "Repulsion" and 1968's "Rosemary's Baby," two of Polanski's masterpieces, were disorienting in their claustrophobic settings inside drab apartments and justified. In the case of "Carnage," the entrapment feels contrived on occasion. Near the very end, before the shit might actually hit the fan, Nancy drunkenly and irritably asks, "What are we still doing in this house?!" Good question.

Credit is due, however, to Polanski for the blocking and use of space without it feeling overly cramped or tedious. (There's always that feeling of unrealized potential for opening up a stage play in a film medium, but Hitchcock did it with flying colors in 1948's "Rope.") For better or worse, we definitely feel like we're trapped in with these crazies. Only the pet hamster (that Michael confesses to have relieved from the apartment) emerges unscathed. Drum strains of Alexandre Desplat's score open and send out the film, with the only "music" in between being the stylized banter. That banter might sound stilted and play-like, but in the context of these uppity, prideful characters, it rings true. Considering it's a satire, the material doesn't really ask us to like these people either. The couples' situation becomes such a pressure cooker that their spats and misgivings feel on the verge of exploding into chaos. Pettiness gets the best of them, and they each feel the need to get the final word.

Foster approaches shrillness, her Penelope coming off sanctimonious and unlikable, and constantly blaming the Cowans' son for "disfiguring" theirs. But there's some kind of thrill to see the typically buttoned-up actress just lose it when Penelope finally cracks in her most heated, over-the-top performance to date. Reilly mostly plays mediator as Michael, but his reactions and lines of dialogue are priceless. As passive-aggressive Nancy, Winslet goes whole hog, feeling guilty and vulnerable and then becoming loosey goosey and straight-shooting once the booze soaks up her inhibitions. Waltz easily rides away with the glory, his sardonic delivery and underplayed channeling of a superiority complex (which he established so well in "Inglourious Basterds") earning the most laughs.

"Carnage" is lean, snappy, and acid-tongued, but only occasionally funny. It's not often that a Polanski film ends and you're left with a "that's it?" feeling, but it's still a hoot watching this quartet of top-tier actors ripping into the childish, short-tempered barbarianism of these abrasive yuppies. Is it more of an actorly exercise than a flesh-and-blood film, seeing what four expert performers can do in one confined space? Yes, but as it turns out, these thespians can do quite a bit actually. A confined space is an actor's playground.