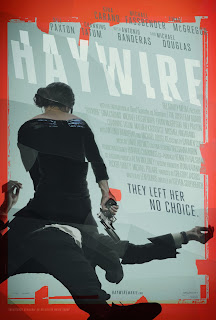 Haywire (2012)
93 min., rated R.
Grade: B
Steven Soderbergh has had quite the eclectic career, dabbling in commercial films ("Out of Sight," "Erin Brockovich," and "Traffic") and smaller, more experimental works ("Full Frontal" and "The Girlfriend Experience"). His latest, "Haywire," is a speedy, entertaining genre movie with an "A" cast but self-consciously "B" aesthetics. And the filmmaker might have found a potential star in mixed martial arts pro and former American Gladiator Gina Carano, who gets to beat the living crap out of her male players. Even if there's nothing more to the newcomer's stone-cold face, "Haywire" plays to her strengths.

Carano plays Mallory Kane, a Marine-turned-covert-operative for a private contract-killing company who's on the run from her duplicitous government bosses. A man named Aaron (Channing Tatum) is sent to retrieve her in a cafe, but she refuses not without a good fight and escapes with a customer, Scott (Michael Angarano), in his car. To clear her name, Mallory tells her "hostage" her story, which unfolds in flashback set pieces. A week before, her ex and the company's director, Kenneth (Ewan McGregor), were hired by a government agent (Michael Douglas) and his contact (Antonio Banderas) to have Mallory and her team rescue a Chinese journalist held captive in Barcelona. Thereafter, her last job was to pose as the wife of a British agent, Paul (Michael Fassbender), in Dublin, but Kenneth sold her out when her fake husband tries to kill her. Betrayed but resourceful, Mallory is all geared-up for revenge, but it's not going to be a fair fight for the men.

Starting with the tagline ("They left her no choice."), the femme-revenge plot—think "La Femme Nikita" crossed with "Kill Bill"—is right out of a grindhouse B-movie. Written by Lem Dobbs (who also wrote Soderbergh's "The Limey" in 1999), the stripped-down script shuffles around the world, chops up chronology of a pretty basic story, and tosses in unexpected double-crossing. Only does it end on an amusing punchline rather than an elegant resolution, but it's all a pretext to sell Carano as a mass-market star.

Off the bat, "Haywire" opens to a snow-covered upstate New York in a cafe where a gender-flipping knock-down, drag-out fight goes down. The man-on-woman, hand-to-hand combat is cleanly staged without being jerky or edited to pieces. Every kick and punch is heard and felt that it's brutal fun with a realistic edge. Soderbergh, typically serving as his own cinematographer (under his "Peter Andrews" pseudonym), lets the camera sit back and capture Carano's kick-ass moves, especially when she and Fassbender practically demolish a Dublin hotel room. He also seems to be harkening back to '70s-style pulp thrillers, like Quentin Taratino tends to do, with a jazzy David Holmes score and crisp, yellow-filtered visual style that's shot on the Red One digital camera. There's also one very long, skillfully executed tracking shot that follows Mallory down a Dublin sidewalk, as she's being followed either by a bystander across the street or a driver in a car.

Without a doubt, Carano has what it takes to join the cinematic ranks of stalwart Wonder Women, next to the fictional likes of Ellen Ripley, Sarah Connor, and Lisbeth Salander. Her line delivery might be a little stiff here and there, but only time will tell if she's well-rounded enough to do more than kick ass and take names. What she lacks in acting experience here, she makes up for in her tomboy/ROTC physicality and fierce presence. (There's much ado about her voice being digitally lowered in post-production, but ignore the advanced notice and it's never distracting.) Carano takes a beating and does the beating without a stunt double, and her Mallory never feels superhuman, limping after falling from a wire in one instance. Her co-stars are on hand mostly for name value, relegated to being stock evil suits and punching bags, and Bill Paxton appears as Mallory's father whose beach house becomes the setting for a showdown.

If it weren't for Soderbergh's visual panache, promising line-up of actors, and the introduction of Carano, "Haywire" would have nothing more to offer as a routine action-thriller. But as it is, this is a lean, mean kick in the head.