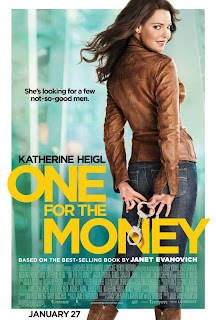 Because of its unconfident studio executives, "One for the Money" wasn't screened in advance for critics, but receiving a dead-of-winter January release is the first tip-off. Based on the results of this screen adaptation of Janet Evanovich's 1994 best-seller, the only justice the movie does is to question how the source material became anything more than a nondescript airport read. Unless it completely tanks, "One for the Money" probably isn't the last time we'll hear from Tastycake-loving bounty hunter Stephanie Plum, as the author has produced seventeen novels (plus holiday novellas) about Plum's adventures since then. Regardless, it's a mediocre and forgettable vehicle for star and co-producer Katherine Heigl, who can't lie and say this material picked her.

Having been laid off from the Macy's lingerie department six months ago and now having her car repossessed, divorced, born-and-bred Jersey girl Stephanie Plum (Katherine Heigl) realizes she needs some cash…and fast. Her Ma (Debra Monk) just wants her to find a husband, but Steph decides to convince her sleazy cousin Vinnie (not the same one you're thinking of) to give her a job at his bail bonding company. Stephanie is so desperate that she takes up the position of recovery agent, with her first job being to bring in a rogue cop, Joe Morelli (Jason O'Mara), accused of murder and jumping bail. His capture would offer her $50,000, but he's the same Joe that deflowered Steph on the floor of a bakery back when they were in high school and then dumped her. Gee, might she rekindle sparks with Joe again or bring him in for the money?

Considering her output of formulaic romantic comedies after her appealing lead role in 2007's "Knocked Up," Heigl keeps getting work and it can't all be coincidental or paycheck-related. The actress can be charming and funny (even in her hilariously gutsy faux-campaign in eliminating testicles, entitled "Katherine Heigl Hates Balls"), but often the helplessly spazzy, type-A chick-cartoons she overplays feel like insults to the already-condescending "chick flick" label. Heigl isn't unappealing here, bringing her eager-beaver energy, but despite sporting a curly brown wig, she's miscast as a Jersey bounty hunter. And that "Joizy" accent is so broad beyond belief that one almost expects Joe Pesci to play her father and Snooki her Guidette gal pal. Whether or not an actress could've believably assumed the toughness of Plum, it's all a matter of the character on the page. Any proof of Plum's financial woes is taken care of in the animated title sequence, the credits rolling over collection-agency bills and eviction threats. Also, her one friend, Mary Lou (Annie Parisse), is only seen through phone calls for expository reasons and seems to be taken from a whole other movie entirely. O'Mara (a buffer Aidan Quinn) is hunky enough, as is Daniel Sunjata playing Plum's bounty-hunting mentor, but the only heat that exists is from both males and their female star being attractive and in good shape. Debbie Reynolds gets to play the kooky-grandma shtick that would better suit Betty White, spouting knee-slapping zingers like "Who wouldn't enjoy a nice thong?" Only the scenes with Sherri Shepherd, as information-giving hooker Lula, actually pop to life.

Directed by Julie Anne Robinson (2010's "The Last Song"), "One for the Money" has no real handle on cohesion, bouncing from farce to thriller. We go from Debbie Reynolds shooting a roasted turkey, to a hooker being beaten, to Stephanie being handcuffed naked to her shower rod, to a car blowing up with the driver inside. Having Stephanie blather on in voice-over narration only flattens the tone-deaf, unfunny clunker of a script (written by three women, Stacy Sherman, Karen Ray, and Liz Brixius). As if she's cracking a joke to us, the character quips "Sure, I had to see an old guy's twig and berries, but at least it bought me a meal that didn't come in a Lunchables box." Or, "All I know is how to swing a purse." Hopelessly un-snappy dialogue like this begs for a desperate laugh track, but doesn't deserve it.

Though Evanovich's novels are categorized as mysteries, the mystery on screen only pretends to be interesting. So many leads and bad guys (one distinguishable by his flat nose!) are thrown at us, as if we're supposed to make sense of who is who. Then a non-suspect (a nude old man) is tossed in for bad comic measure. Finally, when it's time for the reveal of the bad guy, scene to scene turns from dusk to night on a dime and the "real" bad guy feels tacked on. Then again, we should know better; when a name actor feels to be short-shrift in a seemingly irrelevant role, he's probably going to be more relevant to the plot than we thought. Staying home to snack on cheese puffs and Tastykakes might be a better time than "One for the Money," but it's a hair less obnoxious than 2010's "The Bounty Hunter." In January, that's damning with faint praise for you.