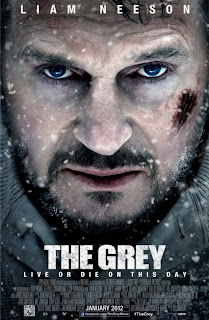 Jaded winter releases for movies seem to do more good than bad for Mr. Liam Neeson, fastly becoming a badass action star at sixty years of age. 2009 brought "Taken" in January and in February of 2011 came "Unknown," both announcing Neeson's credible and entertaining badassery. Now, another year and another January, Open Road Films is packaging "The Grey" as a standard-issue man-versus-wild B-movie thriller, but beneath the surface of the finished product, it offers more than meets the eye. Like a bait-and-switch act, "The Grey" is being advertised as the third "Don't Mess with Liam" actioner, cobbled together from 1993's "Alive," 1997's "The Edge," and a do-or-die Gary Paulsen novel. Against all expectations, it's a stark, high-minded survival tale with a boldness, unlike most January studio films, when it actually takes time to flesh out its characters and avert clear-cut conclusions.

Liam Neeson plays John Ottway, a marksman hired by an Alaskan oil refinery to rid the oil-drillers' camp of wolves and bears. In the day-to-day drudgery among roughneck workers, he pens a letter to a woman he's no longer with, reads his old man's poetry, and contemplates suicide, but plans to get back home. Ottway's death wish is reconsidered when the plane bound for Anchorage crashes in the snowy wilderness. One of only seven survivors, Ottway automatically takes charge in trudging through the snow in these severe, ten-below temperatures. That's the easy part when a den of vicious wolves come out, and not to play. Luckily, Ottway knows a thing or four about these doggies and kills them for a living.

Director Joe Carnahan (2010's "The A-Team"), who co-wrote the script with Ian Mackenzie Jeffers (based on Jeffers' story "Ghost Walker"), has made a grand leap as a filmmaker, allowing the viewer to see a film about something other than action and noise. There is well-made action for sure, however, it's the human element that drives it all. The basic structure is virtually the slasher-flick formula of "Ten Little Indians," but themes of faith and existentialism add meat to the bare-bones storytelling. The characters are archetypes with bravado but have more going on in their minds and hearts when they sit around the campfire and their vulnerable sides come out. One man dies before we even get a name or a backstory, but it's Ottway's straight-up honesty ("You're going to die. That's what's happening.") that makes us give an emotional damn.

Neeson, with his Irish accent intact, is formidable and credible. His Ottway is a tragic man, coming close to taking his own life to now leading a struggle for survival. The brash, tough-talking blowhard Diaz (Frank Grillo), who undermines Ottway, could've been a one-dimensional villain, but he even feels human by his flaws. Then there's Talget (Dermot Mulroney, almost unrecognizable behind eyeglasses), a level-headed man with an adorable daughter to get back to. When one character can't go on, he hands the survivors his ID and wallet (which they've done with the other bodies to return them to family members) because he has nothing to look forward to back home. When the body count whittles down to three, those remaining finally introduce one another by name and it's a quietly poignant moment. Director Carnahan actually lets us feel something here without clobbering us or hitting the nail on the head with a heavy-handed music score.

The camerawork is grainy and appropriately grey, and the bitter cold is palpable without ever feeling manufactured. Quiet dream sequences and flashbacks of Ottway with his wife, laying next to him and saying "Don't be afraid," are punctuated by sudden bursts of loud, jarring noise. One of those times is the plane crash that sets everything in motion, and it's so vivid and intensely staged with a staggering sound design of the turbulence taking our breath away. The flashbacks could've been hokey, but add subtle surprise in the way of Ottway's emotional bruising. The wolves themselves, aside from the obvious computerized kind in close-ups, are threatening in spades. There's an early shot where the wolves approach the survivors with only their glowing eyes seen in the darkness. For what it's worth, these wolves beat out the cheesy, talking ones in the "Twilight" movies. Even when the wolves aren't present, one tangibly feels the danger at stake, and the sound of a howl makes sure of that. There is also the danger and fear of heights in an armrest-grabbing set-piece, as the remaining men cross a thirty-foot drop by rope. Mainstream audiences might find the final shot abrupt and too ambiguous, but it's pitch-perfect in which it doesn't feel the need to spell everything out for us. A more pat, Hollywood ending would have had a helicopter coming to the rescue. Gristled, visceral, and meditative, "The Grey" packs a surprising wallop and a shade of grey (pun intended) that's hard to find these days.