Without being a disaster, "Devil Inside" still cheap and unsatisfying 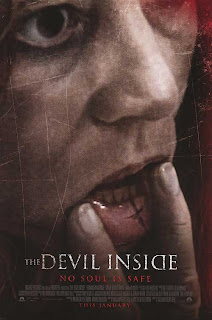 It's a new year and another January, so that can only mean one thing: some studio feels the need to dump yet another possession/exorcism flick into nationwide multiplexes. Even if the Devil made Paramount Insurge release it, the bloom's off the rose for "The Devil Inside," not only a possession/exorcism flick but one that claims to be "found footage." Why stop there? The supposedly surviving footage is precluded by a bogus disclaimer that "the Vatican did not endorse this film nor aid in its completion." Riding on the wave of every post-"Blair Witch" found-footage novelty, particularly 2010's faux-documentary "The Last Exorcism," this would-be mockumentary does a mostly ineffective job of matching a similar concept. Last January's religious-horror dud, "The Rite," gave Sir Anthony Hopkins the chance to get his Devil on and name-call a priest "kissy lips." And "The Devil Inside" gives us one of the worst sucker-punch endings in Found-Footage Flick History.

On October 30th, 1989, Maria Rossi (Suzan Crowley) dialed 911 to confess that she murdered three clergy members of her church during her own exorcism. She was then committed to Centrino Mental Hospital in Italy. Now, in 2009, Maria's estranged daughter, Isabella (Fernanda Andrade), decides she "has to know what really happened" and if the woman who bore her suffers from a mental illness or is actually Linda Blair-possessed. Fearing that it could be in her genes, Isabella agrees to have documentary filmmaker Michael (Ionut Grama) follow her as she heads to Rome. Sitting in on a class that teaches exorcisms, she employs the help of two Catholic priests-in-training, Ben (Simon Quarterman) and David (Evan Helmuth), who perform illegal exorcisms against the will of the church. Luckily, the cameraman catches it all on video!

Inauspicious director William Brent Bell and co-writer Matthew Peterman (who previously teamed up for an even dopier, junkier horror flick, 2006's "Stay Alive") begin with an intriguing setup. The first half reveals Maria's grisly crime in an investigation walk-through, ready to play with our expectations. Then after Isabella's goal is introduced, we're treated to a tense meeting between estranged mother and daughter that ends with Maria's chilling show-and-tell of inverted crosses self-carved into her skin. The very pretty Fernanda Andrade has doe-eyed appeal, but some pretty idiotic dialogue does her no favors. Bonnie Morgan, a real-life contortionist, uses her talents to unsettling effect as Rosa, a possessed young woman that curses in a smoky voice, leaks menstrual blood, and contorts herself into a pretzel. But the performance with the creepiest indelibility is the one by dowdy Melissa Leo-lookalike Crowley, who's effectively committed and convincing. In full-on possessed mode, she cackles and hisses in tongues that even Father Karras from the landmark "The Exorcist" would have to change his diapers. It's during the exorcism scenes where "The Devil Inside" actually rattles your nerves.

Then once the focus shifts to the four characters, Bell and Peterman just run with one stupid narrative contortion after another. Suspension of disbelief is a must for this movie to work, even though it's shot as real footage, but it becomes mighty apparent that the foundation is too flimsy to be convincing. When Ben and David take Isabella to a "practice exorcism," the victim's parents have moved their possessed daughter to their dark, murky basement. How convenient for a lazy horror film. Or, for no reason at all, how about when Michael films a baptism-gone-wrong that David conducts? One more. When Maria spawns multiple possessions, who knew having one's body possessed was so quickly contagious, like catching the flu or turning into a vampire? Okay, one more. Is it really Satan himself, or just demons, or does Satan have demonic interns subbing for him?

"The Devil Inside" isn't the audience-booing disaster that it's fast becoming or seems to be from all of its shortcomings. It's just a lot of wheel-spinning, put back on track by the occasional chill, until the shaky start of a third act and a payoff that never come. Ultimately, nothing is resolved and one can only assume the filmmakers gave up from lack of caring that their "ending" was cheap, annoying, and unsatisfying. Ambiguity is one thing, but it's treated as such a cheat that, get this, director Bell cuts to black with a website so we can read up more on the "true" investigation. For those of you who thought "The Blair Witch Project" or any of the "Paranormal Activity" movies ended abruptly, just wait until you get a load of this malarkey.