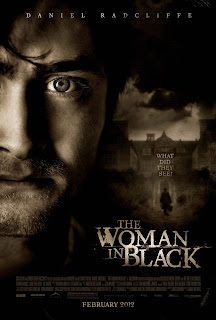 England's Hammer horror banner is finally revived with "The Woman in Black," the first to be shot in its UK home in more than three decades. If this deliciously spooky, retro-creepy Gothic-horror period piece was made in the mid-1950s, Christopher Lee might have starred as a vampire. Now, with the role of Harry Potter taking up a decade of his career and now behind him, Daniel Radcliffe receives his first adult role as the traveller hoping to banish the title specter. Obviously, he is the star attraction for anyone going into the theater, but the haunted house runs the show. Based on Susan Hill's 1983 novel, which was previously turned into a 1987 stage play and made into a 1989 BBC movie (that coincidentally starred Adrian Rawlins, who played father James Potter to Radcliffe's Harry), "The Woman in Black" harkens back to the old-school tricks of making horror. As square and classical as the genre chestnuts it follows, the film is very light on the blood, but heavy on the fog and boggy mud.

Four years after his wife died giving birth to their son, 1920s, London solicitor named Arthur Kipps (Daniel Radcliffe) is dispatched to the small village of Crythin Gifford. There, he must settle the estate of Eel Marsh House, once owned by recently deceased propriestess Alice Drablow. Upon Arthur's coming to village, children peer at him from windows and there is no lodging available for him to stay the night. Arthur must return to London with the estate's papers in hand, so fortunately he accepts the hospitality of the wealthiest couple in the glum town, Samuel Daily (Ciarán Hinds) and his tragedy-suffering wife (Janet McTeer). Mr. Daily is more skeptical, but the townsfolk are deadened with fear about the ghost of Mrs. Drablow that has something to do with the increasing fatality rate of children. Once Arthur decides to work through the night in Eel Marsh, he soon discovers that the superstitions of a woman in black haunting the manor are real.

Coming off his 2008 British hoodie-horror picture "Eden Lake," director James Watkins cloaks this film in Gothic fog and atmosphere that especially owe debt to "Sleepy Hollow," "The Others," "The Orphanage," and "Don't Be Afraid of the Dark." Unless audiences are too weaned on the gory-kill template of slasher flicks, old-fashioned dread and a slow-burn tempo are surefire tools to make one truly commit to a horror film. That way, scares will come to those who wait. The quietly macabre prologue, in which three little girls stop playing with their dolls and simultaneously jump out of the windows, establishes the foreboding tone and lack of compromise for even innocent children. In the first half, immediately as Arthur enters the house actually, Watkins doles out too many cheap "boo!" tactics, accompanied by a loud noise or sting on the soundtrack. Still, these moments are teasingly effective and should make one jump on cue anyway: static shots down dark hallways, background views of doors opening to reveal shadowy figures, a rocking chair rocking by itself, and wind-up toys starting up on their own. When the film gets down to this business, it sends a shiver or stands our hairs on end.

Initially, it's hard to believe the 23-year-old Radcliffe as a frock-coated widower with a four-year-old son, but he convinces and turns in a reactive, workmanlike performance. Even without a lightning-bolt scar on his forehead, the actor carries the film with a reliable presence. When tiptoeing down the hallway with a lit candle (and an axe, at one point), Radcliffe does so with authority rather than scaredy-cat hysterics. Hinds and McTeer, who gets to channel the spirit of their dead son in one overwrought dinner, respectively leave memorable and devastating impressions. And that mansion—dilapidated, shrouded in fog, and cut off from a village by high tides—is a masterpiece of production design, art direction, and set decoration.

Following her eclectic quartet of feature films (2007's "Stardust," 2010's "Kick-Ass," 2011's "The Debt" and "X-Men: First Class"), screenwriter Jane Goldman pens this ghost story. The storytelling is traditional, cut down to the bare essentials, and grim enough to prove PG-13 horror offerings don't have to be watered-down. Speaking of grim, the finale is bittersweet but ultimately satisfying in that it gains some emotional oomph and doesn't just tack on a sequel setup. Disbelief must be suspended for an old genre stand-by—Arthur going back to the house and sticking around—to propel the narrative along, however. But if that scary-movie trope didn't happen, there'd be no movie or the spookiness would just be scarce. Haunted house movies are a deathless tradition and by their design to frighten us, this film is a lot of old-fashioned fun. Similar to 2011's shivery "Insidious" being a funhouse with spooks over splatter, "The Woman in Black" jangles your nerves in the most tried-and-true ways. Now light your candle and don't blow it out.