Likable "She's Out of My League" has its moments 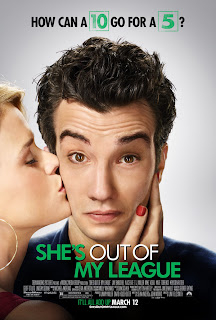 Paging Judd Apatow, "She's Out of My League" sounds like a knockoff of the opposites-attract, salty-and-sweet marriage, "Knocked Up," that worked so nicely like a bun in the oven. But since we're in high demand for a decent romantic-comedy, which hardly sounds like a ringing endorsement, this is a pleasant formula picture that simply does what it sets out to do. Finally, a star vehicle for Jay Baruchel, who's a cross between Michael Cera and Jason Biggs with Don Knotts' googly eyes and gangly, 12-year-old bod, he plays Kirk, a boyish, gawky security screener in the Pittsburgh Airport.

This being a timeless average-guy-meets-hottie tale, he meets a perfectly beautiful event planner named Molly (Alice Eve), who forgets her cell in security checkpoint and he has to return it to her. And before you know it, they're dating. She thinks he's a nice, safe guy that won't hurt her and he can't believe what she sees him: basically, he's a 5, she's a perfect 10. Kirk and Molly seem to be the least likely match ever since Seth Rogen and Katherine Heigl and they may have their complications, but hey, that's why they make movies.

Director Jim Field Smith's comedy might be slight, and Sean Anders and John Morris do write the oldest climax in the book (a mad dash to the airport!), but it's sweet-natured, has a poppy soundtrack, and gosh darn it, we actually like these characters. There's a nice chemistry between Baruchel and Eve, allowing them to click as a comfortably appealing couple, and the movie succeeds on the fact that you want the leads to have a chance even if we're mostly buying it on a somewhat realistic male-fantasy level. And on their own, Baruchel is endearing as this average Joe rather than a flat-out geek, and British beauty Eve is radiantly sunny and genuine, playing an actual person here. T.J. Miller and Krysten Ritter are hilariously deadpan scene-stealers as Kirk and Molly's blunt best friends.

Now there is some crassly unfunny business involving shaved pubic hair and premature ejaculation in Kirk's pantalones (parents walk in, cue the licking dog named Captain Pickles, or as one calls it, his “whoopsy daisies early-bird special”) and some of the family characters are just shrill caricatures. But these minor missteps don't detriment the movie's more natural humor and heart: funnier and more convincing stuff is in the bro-banter with Kirk and his airport-work pals. Considering the dubious wasteland of romantic comedies in the last few years, "She's Out of My League" takes a likable, slightly generic stance, like the hero, that's out of those bad entries' league.