"Silent House" a neat trick that makes you squirm 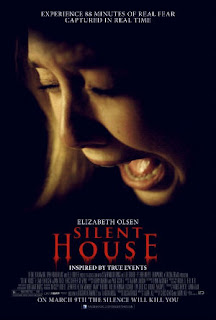 In Americanizing the 2010 Uruguayan horror film "The Silent House (La casa muda)," husband-and-wife filmmakers Chris Kentis and Laura Lau had their work cut out for them. The deal breaker for that lackluster film was its wishy-washy narrative route when it came time for the story to come together. But Kentis and Lau, who scared vacationers away from scuba diving with their tense 2003 nightmare "Open Water," conquer such a tall order in the couple's latest effort — "Silent House."

In place of attending college, Sarah (Elizabeth Olsen) is helping her father John (Adam Trese) and Uncle Peter (Eric Sheffer Stevens) fix up their family summer house so it can be sold. The place is dilapidated with black mold and it's boarded up from the inside, and there's no power, so each of them must use a lantern or flashlight. (Oh, and there's only one key to lock and unlock the front door and they have no cell service in the area, so there's no room to call "logic holes.") Sophia (Julia Taylor Ross), a playmate from the past who lives nearby, stops by to visit, but Sarah can't seem to place her. After John and Peter get into a squabble, Peter heads into town and Sarah starts packing up her bedroom. A loud noise startles Sarah, so her father investigates but then disappears. She later finds him bloodied in a closet, but still breathing, so Sarah tries to find a way out when she's not being chased around by a mysterious man. Is it a squatter that's terrorizing Sarah? Or is the house haunted? Or…is it something else?

Like the first film, the stylistic conceit of "Silent House" is that it's shot in one continuous take and played out in real time over the course of 85 minutes. Even though this isn't the groundbreaker for such a cinematic stunt—Hitchcock accomplished this illusion in 1948's "Rope"—it's still a neat trick, and not a simple undertaking (wow, no boom mike shadow?!). Kentis, Lau, and cinematographer Igor Martinovic demonstrate dexterous choregraphy to convince us that we're watching a "oner." And film geeks can try sniffing out where the actual cuts were made, but they are seamlessly and sneakily concealed.

Where "Silent House" scores is in cranking up the disconcerting, nerve-frying unease from the intimate technical angle. Also, what a difference a new script (and a few tweaks to the final revelation) can make to the final product. Managing to get around the snags of the foreign version's stupid, sloppy writing, Lau's script better handles the by-now standard twist, so it works under scrutiny in retrospect. A few too many clues are dropped before the big reveal and feel like less-than-subtle devices. That includes snippets of foreshadowing dialogue and shots of Sarah's father and uncle spotting a batch of Polaroid photos and then hastily putting them away in a drawer or pocket. However, the manner in which secrets are finally presented doesn't feel like a cheat and, compared to Gustavo Hernández's film, actually disturbs on the second try.

Even before her extraordinary star-making performance in 2011's unforgettably haunting "Martha Marcy May Marlene," Olsen made this other Sundance movie. And now, she has finished three more projects under her belt and three more in pre-production. Here, her on-the-fly performance is so watchable and committed, and good thing, because the camera never leaves her side and she has to hit her mark. After the quiet opening credits, an overhead shot finds Sarah perched on the rocks at water's edge. From then on, the camera stays on her as she's hiding and cowering under tables and beds, and running up and down the stairs. Olsen goes through the emotional wringer, with her scared face conveying a vulnerability and strong intuition. As we go along with Sarah, we don't know anything more than she does, waiting for something or someone to pounce on her and us. Even when she has to creep down to the dark basement (her only exit), Sarah doesn't provoke the viewer to be frustrated, shout at the screen, or slap their forehead, which some horror heroine/scream queens tend to do. Trese and Sheffer Stevens aren't entirely convincing as Sarah's father and uncle, but Olsen is the real star in the frame.

Another Hitchcockian trick, the flashing of a Polaroid camera providing the only form of light in a pitch-black room, is sure to make the viewer squirm. An added touch by Kentis and Lau—the sudden opening of an SUV trunk—should also make one's hairs stand on end. "Silent House" might not reinvent the spooky-house genre in any way, but as a visceral experience, it's mostly effective at what it aims to do, which is putting a lump in your throat.