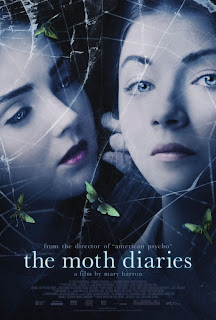 Based on Rachel Klein's novel, "The Moth Diaries" seems to want to explore female sexuality, relationships, and anxiety. But as written and directed by Mary Harron (2000's dark, slyly satirical "American Psycho"), the film turns those intriguing aforementioned themes into a thumbnail for an undercooked, mostly two-dimensional "From Hell" drama with a vampire. It's "Let the Right One In" meets "The Roommate," two movies that should've never been converged.

Two years after her notable poet father committed suicide, 16-year-old Rebecca (Sarah Bolger) gets dropped off to start a new term at Brangwyn College, a former hotel that's now an all-girls boarding school. She counts on her best friend, Lucy (Sarah Gadon), as her source of companionship, until the arrival of the new girl. Her name is Ernessa Bloch (Lily Cole), and she seems a little strange, staring out of windows and pacing in the courtyard at night. However, Lucy is the first to warm up to Ernessa, and Rebecca becomes quite jealous. As she learns about Gothic vampire stories in her English class, taught by dishy professor Mr. Davies (Scott Speedman), Rebecca begins to suspect something off about the new girl. Ernessa's room smells. A classmate plunges to her death. Soon, Rebecca's obsession with Ernessa and Lucy becomes too much for her dwindling group of other friends, until she's alone.

Predating "Dracula," the tale of "Carmilla" taking over the narrator becomes a major parallel to narrator Rebecca's suspicion of Ernessa. The film also remains faithful to the diary narration in Klein's novel. Is Rebecca an unreliable narrator (with unresolved feelings about her father's death) or is Ernessa really one of the undead with an affinity for plasma? Harron leans towards the latter, overliteralizing it with scenes of there-she-is-and-now-she's-gone, Ernessa walking through glass, and brief girl-on-girl action. Had Harron taken a more ambiguous, surreal approach, the story might've been more interesting.

Harron seems to throw in thematic elements, hoping to form a meaningful whole, but little of it commits. The theme of teenage sexuality is introduced through plot points, but then feels oversimplified and unexplored. Rebecca and Ernessa have some sort of kindred-spirit connection (both losing their fathers), but it never amounts to anything deep. Same with Rebecca keeping watch as one of her friends goes to lose her virginity and comes back unimpressed. As for the film's obsession with moths, Rebecca's happiest memory shared with her father is the beautiful sight of seeing a lunar moth, and then later, Rebecca sees a swarm of moths inside Ernessa's dusty bedroom. To Harron's credit, she doesn't carry out the moth symbol with too heavily a hand.

All grown up since 2002's "In America" and masking her native accent here, Irish lead Bolger has an earnestness and innocent appeal that resembles Ellen Pompeo (TV's "Grey's Anatomy"). She never pushes or overplays the damaged trauma, paranoia, and frustration of Sarah. British model-turned-actress Cole has such an ethereal, moon-shaped face and swollen cheeks that she's perfect to play a vampire, but really only has one note to play Ernessa. Of their fellow classmates, only Gadon and Valerie Tian stand out, respectively as the much-loved Lucy and free spirit Charlie. Speedman, the only real male character (aside from Rebecca's father in flashbacks), does what he can with the sketchily drawn Mr. Davies, a listener for Rebecca.

This distaff story has some emotional depth and truth in the parasitic nature of female relationships. Filmed in Montreal, "The Moth Diaries" has solid production design without overdramatizing its Gothic-horror leanings. The horror elements are more metaphorical than cheap but either way, not very scary. Final revelations in the last ten minutes aren't that revelatory, except maybe to Rebecca, and the climax lacks any sort of suspense or struggle. At face value, there is one chilling moment of blood raining inside of the school library.

"The Moth Diaries" is a handsome production and had promise to be more. Less provocative than it thinks it is, Harron's treatment of the source material is mostly an uninspired, bloodless "Gossip Girl" episode. If this is the best Harron could do, then maybe Ms. Klein's novel wasn't really about anything in the first place.