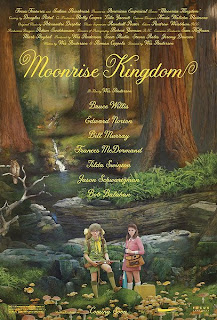 Fourteen years ago, film auteur Wes Anderson made "Rushmore," and it still remains his greatest work. It was and is a wistful, witty, original, and endearing film. 2001's "The Royal Tenenbaums" is his second best, a joy of dry, offbeat eccentricity. It's too bad that besides 2009's enchanting stop-motion film "Fantastic Mr. Fox," 2004's "The Life Aquatic with Steve Zissou" and 2007's "The Darjeeling Limited" have set back the filmmaker who's been growing into a broken record of the quirky and twee. Precious, emotionless, and self-satisfied misfires they were, but on the contrary, all distinctively designed as his own, given the "Wes Anderson" stamp, so at least he's consistent. But finally, Anderson has re-found his voice with his latest and it's still all him. Anderson's second writing collaboration with Roman Coppola after "The Darjeeling Limited," "Moonrise Kingdom" is his first work about children, and perhaps that's why it's arguably one of his warmest and most romantic.

It's 1965, on the island of New Penzance, and summer is coming to a close. Khaki Boy Scout Sam Shakusky (Jared Gilman), an orphan and the least popular boy in his troop at Camp Ivanhoe, has flown the coop with his pen-pal love, Suzy Bishop (Kara Hayward). Ever since he first set his eyes on Suzy dressed as a raven in her dressing room before a church production of "Noye's Fludde," Sam has written her letters, until they both set off to meet each other and be together on a remote island via Sam's expert camping skills and Suzy's binoculars and suitcase full of overdue library books. Meanwhile, Sam's foster parents aren't welcoming him back, but Scout Master Randy Ward (Edward Norton) gets his entire troop to start a search party that turns into a vicious manhunt. And Suzy's lawyer parents Laura (Frances McDormand) and Walt (Bill Murray) begin their search, but have their own problems, as Laura is having an affair with the island's lone-wolf police officer, Captain Sharp (Bruce Willis). These troubled, misunderstood 12-year-old runaways are going to be hard to separate, even if a storm is brewing toward the island.

At its storybook heart, "Moonrise Kingdom" is a coming-of-age fable of summer lovin' between prepubescents. Wry, whimsical, and endearing, the film's tone is nevertheless off-kilter, but Anderson manages to make the adolescent romance between Sam and Suzy (no shortage of credit to his young actors) a sweet thing of nostalgic yearning and end-of-summer melancholy. We're right there with Sam and Suzy, and feel their emotions of the human experience. What makes "Moonrise Kingdom" more special than everything post-"Rushmore" is that the characters, mainly the youthful leads, don't feel odd for oddness' sake. Instead of using characters at the mercy of his look-at-how-odd-we-are details and overall trademark style, Anderson forms actual characters here.

As idiosyncratic of every one of his films, Anderson puts hard-earned fuss into the art direction. The dazzling opening sequence, a tour of the Bishop dollhouse, belongs in a museum. From the kitschy design down to the fluid camera movements and precise, dead-center screen compositions, every room looks like a quirkily gussied-up diorama, Anderson curating each frame with a painterly eye and cultural influences. Even the credits are formatted in calligraphy font and placed in the top right of the frame. It's overwhelming at first, but slides into a groove natural to the story that one can't help but savor each interesting frame. The simplest sights are turned into funny, surprising comedic gags (i.e. a too-high treehouse, the beetle earrings Sam makes for Suzy). And as an impending flood and storm forces Sam and Suzy's longing to come to a head, the climax atop a watch tower of St. Jack's Church is intentionally artificial but, again, visual perfection. Even Alexandra Desplat's score sampling French New Wave sounds of Benjamin Britten's "Young Person's Guide to the Orchestra," Francoise Hardy's "Le Temps de l'Amour," and Hank Williams' "Kaw-Liga" on Suzy's brother's portable record player is perfectly harmonious and charming.

Kara Hayward, making her film debut, is a beacon of vulnerability and outcast empathy, as is newcomer Jared Gilman. They both have great expressive faces for deadpan comedy, and as characters, we want Suzy and Sam to experience freedom together, away from the crazy, more cynical adults. They get to experience their first kiss and grope, and those scenes are never skeevy but innocent and touchingly awkward. Both characters are smarter and more grown-up than the grown-ups, and they're written with genuine affection and humanity. Anderson really makes his film about these two kids, and it's for the better to make them the standouts.

We're kept at an emotional distance from the adults, who are all tasked to act like deadpan buffoons with the only heft behind their sad, lonely eyes, but the actors get enough absurdist stuff that makes them so highly amusing. Bill Murray (a constant in Anderson's films) and Frances McDormand are just sad enough to be funny, the former making the throwing of a shoe pretty priceless, but Bruce Willis and Edward Norton have the most heart, even if goofy costuming trumps emotional resonance. Known only as "Social Services," Tilda Swinton makes the most of her innately stern demeanor as the all-business social services worker. Even around the margins, the great names (Lazy Eye, Roosevelt, etc.) of Norton's scouts are played by wonderfully fresh faces, and Harvey Keitel and Jason Schwartzman turn up in bit roles as the scout chief and cousin Ben. Schwartzman, in particular, is very funny as he evokes Max Fischer, making sure Sam and Suzy are ready before he "marries" the two underagers. Also, Bob Balaban, with a beard and in a red rain slicker, is seriously amusing as the narrator who stages the scene with history of New Penzance off the New England coast.

It's about time Wes Anderson leaves his arch, self-consciously cute quirks on the outside, so they don't smother the story, and sincerely weaves this one from his heart. There's no forced, annoying smugness here, just an effective balance of style and substance. Even if nothing in the auteur's films ever feel extremely terrestrial, "Moonrise Kingdom" feels more like magical realism, served well by the storyteller's eccentric sensibility. It's cause for celebration when a working filmmaker returns to the form that made him a fresh, exciting filmmaker in the first place, missteps be damned. Let's hope he stays on track from this point forward, but in the meantime, "Moonrise Kingdom" is a lovely little delight. It will be cherished by devotees of Anderson's oeuvre and probably won't change the minds of detractors, but it's definitely his most accessible (at least in Anderson World) since the quintessential "Rushmore."